From the 1970s for the next 40 years, virtually every aspect of the punishment system, from the way people were processed before trial to the way people were confined after conviction, grew harder. Thresholds of punitiveness people never thought our democracy would ever have became official policy: life without parole and death penalties for young people; lengthy detention before trial; humiliation and long periods of extreme isolation during confinement; decades behind bars for minor thefts and possession of drugs. ~ American criminologists Todd Clear & Natasha Frost

The crime rate shot up over a decade before the imprisonment rate began its ascent. Befitting a rigged economy, the great majority of crimes are economic: 10 times the rate of violent crime.

The framing of the crime problem as requiring an all-out “war” in response has had lasting consequences. The various war metaphors that have been used to characterize the necessary response to crime problems for at least the past 4 decades are important in that they served to legitimize the anything-goes approach that drove penal policy over that period. These wars also notably contributed to the increasing racial divide in punishment. ~ Natasha Frost & Todd Clear

From the last overall crime peak in 1994, crime rates have fallen. Incarceration rates did not follow the downward trend. The hardened criminalization system did not responsively soften. 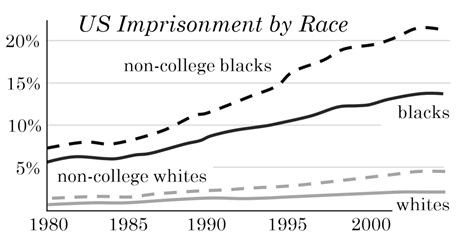 From 1980 to 2000, imprisonment for nonviolent crimes tripled. For drug offenses, the increase was 11-fold. Overall, the country’s incarceration rate quadrupled.

(97% of federal inmates and 67% of state prisoners were convicted of nonviolent crimes. Well over half of those languishing in municipal and county jails are innocent of the crimes they are accused of; most there are awaiting trial.)

In several states, law enforcement now charges with murder those who took illegal drugs with someone who overdoses and dies. Such cruelty helps keep the prisons well stocked.

This increase in arrests and imprisonments, accompanied by longer sentences, even as crime has dropped, is a sign that our society has become progressively more punitive, because we have made a collective decision to increase the rate of punishment, especially for blacks. It is impossible to reconcile this situation with the basic rights granted in the constitution. ~ American penologist Ernest Drucker

The US has over ~3,300 prisoners serving life sentences for such crimes as snitching someone’s sack lunch, petty shoplifting, trying to cash a stolen check, siphoning petrol from a truck, or stealing tools from a shed. Most of these punitions were meted out by the federal government. Over 80% of the inmates so sentenced are black men.

I’m being buried alive at a slow pace. ~ American inmate Ronald Washington, a black man, serving a life sentence for shoplifting 2 sports jerseys worth $90 as a teenager

The US is virtually alone in its willingness to sentence nonviolent offenders to die behind bars. ~ American human rights scholar Jennifer Turner

70% of those in local US jails have not been convicted of any crime. They languish there only because they are poor and powerless. The number of Americans who may be innocent but are indefinitely incarcerated is larger than the prison populations of most other countries.

Imprisonment in the US is a for-profit industry that aims to sustain high incarceration rates. The prison-industrial complex has tremendous political clout.

The privatization of prisons in the US as a supposed cost-saving measure has instead been a subsidy to corporate jailors which has cost the government more money than if it ran incarceration itself.

There’s a perception that the private sector is always going to do it more efficiently and less costly. But there really isn’t much out there that says that’s correct. ~ American political scientist Russ Van Vleet

For one, private prisons restrict the inmates they hold to those who are healthy, leaving the expensive dregs to the state.

It’s cherry-picking. They leave the most expensive prisoners with taxpayers and take the easy prisoners. ~ American politician Chad Campbell

In 2016, the federal government initiated an end to using private prisons, after an investigation found them drastically more unsafe than government-run facilities. With few exceptions, states have not followed suit.

Private prisons simply do not provide the same level of correctional services, programs, and resources; they do not save substantially on costs; and they do not maintain the same of safety and security. Bottom line, I’d also say, you get what you pay for. ~ US Deputy Attorney General Sally Yates

Laws to lessen imprisonment are frequently defeated by those with an economic interest in keeping people locked up. In California in 2008, the prison guards’ union helped defeat a bill that would have aided those with drug addiction rather than sending them to prison for long terms.

Only budget crises in many states has resulted in a slight decline in prison populations. At $28,000 a year to keep an inmate incarcerated, prisons represent a significant financial drain that lessens funds to other priorities, including education and health care.

The United States today is the only country that spends more on prisons than police, and only in recent history. ~ American criminologist Lawrence Sherman

In 2013, 2.2 million Americans were incarcerated: 25% of the world’s prison population, in a country with only 4.4% of the world’s people. 58% of those incarcerated were black or Hispanic. Though only 3% of the US population, young blacks and Hispanics comprise 30% of those imprisoned. These are, by and large, men unable to find decent employment.

America’s criminal justice system has deteriorated to the point that it is a national disgrace. Its irregularities and inequities cut against the notion that we are a society founded on fundamental fairness. Our failure to address this problem has caused the nation’s prisons to burst their seams with massive overcrowding, even as our neighborhoods have become more dangerous. We are wasting billions of dollars and diminishing millions of lives. ~ American politician Jim Webb in 2009

People are celebrating the stabilization of the prison population in recent years, but the scale of mass incarceration is so substantial that meaningful reduction is not going to happen by tinkering around the edges. ~ American criminal justice advocate Marc Mauer in 2016

Imprisonment is an epidemic among the urban poor. In some communities, over 90% of families are afflicted.

Crime rates in communities with high incarceration rates can be traced directly to increases in imprisonment. In other words, what started out as a punishment for crime – prison – has now become a source of the very crime it seeks to control. Massive levels of arrest and imprisonment damage the social bonds that sustain life, especially for poor communities. By corroding or destroying social capital, mass incarceration sets up a perverse relationship: punishment leads to increased crime, as it replaces the moral mechanisms of family and community. These are the forces that normally function to assert social control, over young males especially, by the use of non-coercive means involving family and community. ~ Ernest Drucker

The social effects of incarceration are harrowing. 2/3rds of the American families with a loved one in prison struggle to meet basic needs. 83% of those with their partner incarcerated are women. 20% have to borrow money to make ends meet. Court costs average 1 year’s income. 70% of those families are caring for children under 18 years of age.

The US spends ~$80 billion on incarceration every year. This is a small fraction of what it costs American society, which is estimated at ~$1 trillion annually: 11 times what it costs to keep people locked up.

Every dollar in incarceration generates additional social costs. More than half of the costs are borne by families, children and community members who have committed no crime. While these costs do not appear on government budgets, they do reduce the aggregate welfare of society. ~ American criminal justice scholar Carrie Pettus-Davis

Owing to discrimination once set free, the possibility that imprisonment might bear reformative fruit has proven impossible. Prison deeply scars prospects for a decent life.

Punishment by incarceration operates like a chronic disease to systematically incapacitate individuals, wounding them physically and psychologically while in prison and disabling them for a future of successful participation in American life. Mass imprisonment leaves a trail of psychological, social, and economic damage affecting entire populations where incarceration has become normative, creating a chronic condition affecting millions over a long span of time. ~ Ernest Drucker

79% of women getting out of prison have been unable to afford housing. 67% of former prisoners are unable to find regular employment 5 years after being released.

67% of former prisoners would have liked to return to school and improve their employment potential, but only 27% are able to. 25% are barred from educational loans because of their conviction. 20% are denied public health benefits.

Hence, recidivism is high. 2/3rds of discharged prisoners are back behind bars within 3 years.

Despite its enormity and great significance for tens of millions of our citizens, America’s mass incarceration remains largely invisible. Denial is the norm for the public at large, even in the face of the profound effects imprisonment has on the lives of so many American families. Compared to the burning issues of the day, mass imprisonment is only a marginal political issue at best. ~ Ernest Drucker