Ancient Greek city-states borrowed money. In the 4th century bce, at least 13 of them bilked their lenders: the world’s 1st recorded sovereign debt default. Not much has changed since. 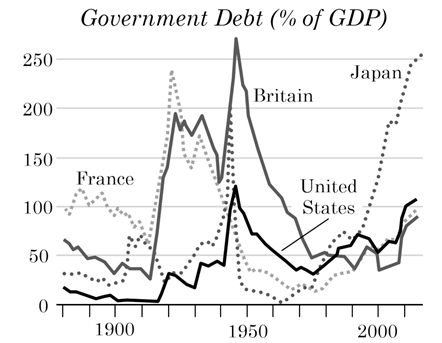 Worldwide, governments cannot balance their books. Even in good times, states typically spend more than they take in. This stems not only from wasteful spending, but also from refusal by states to effectively tax corporations and the rich their fair share.

Since 1946, Britain managed to attain a tiny government surplus in only 4 years (1998–2001). No French government since 1974 has balanced its budget. Japan’s national debt has done nothing but soar since 1992, after its artificially inflated growth machine crashed.

While the US federal government tallied surpluses in the 1920s, late 1940s, 1950s, and for a few years in the late 1990s, the republic’s total annual governmental debt never went into surplus, as state budgets ran in the red. When the federal government did not dole out to the states, state governments had to shell out.

Germany and Canada have been the only large nations to have government surpluses since 2001. Germany’s surpluses were from prudence; Canada’s from a resource exploitation boom.

Low corporate taxes owe in part to competition between states to draw or keep multinational corporations in their territory. By this leverage, behemoth corporations extract preferential tax treatment.

Based upon modeling that ignores actuality, the conventional economic view of sovereign debt is that it saps the private sector of financial resources. This simply is not so, as the wealthy around the world have huge hoards of money that could be productively invested but is instead tucked away to avoid taxation. Much of it goes into the relatively safe haven of government bonds, which prop up sovereign debt. 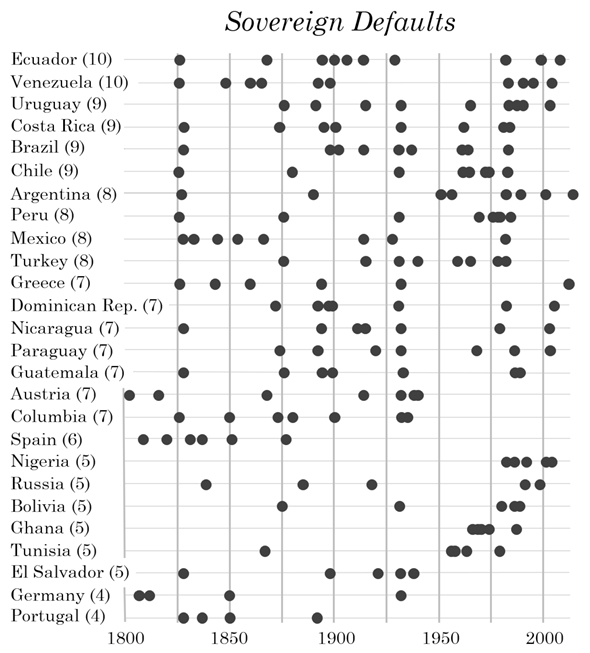 Since the 2008 Great Recession, central banks have been practicing “financial repression”: holding down bond yields by buying sovereign debt, and thus wiping it away. The US has been an especially enthusiastic participant to the equivalent of printing money. Normally, such profligacy deflates a currency and sends domestic inflation skyward; but, with low inflation, and the dollar as the world’s reserve currency, the US government has been able to indulge itself at no cost. The root reason is that tremendous private capital is invested in dollars, and so speculation against the benchmark currency would be self-destructive if not futile.