The early 20th century was a period of political turmoil in Russia. Conflict with a newly militant Japan led to Russian defeat in 1904, forcing Russia to abandon its expansionist policy in the far east.

Discontent with the autocracy of Tsar Nicholas II forced him to transform the government into a constitutional monarchy. The uprising of 1905 failed to oust Nicholas, but it did provoke extensive reforms, including introducing a constitution and legislative body: the Duma.

The outbreak of World War 1 temporarily strengthened the monarchy, but Nicholas squandered the opportunity. Governmental corruption was rampant. Russian armies suffered catastrophic losses against the Germans. The gulf between the ruling elite and public grew to an unbridgeable chasm.

Riots erupted in St. Petersburg on 8 March 1917 over food shortages. When most of the local garrison joined the revolt, Nicholas was forced to abdicate.

The provisional government appointed by the Duma faced rivalry from Soviet revolutionary forces. Unable to halt Russia’s slide into chaos, the communists (Bolsheviks) took control of the country. At the helm was Vladimir Lenin.

Russian political theorist, communist revolutionary, and politician Vladimir Ulyanov was born into a comfortable bourgeois family. Both his parents were teachers with progressive views.

All 5 of the Ulyanov children became revolutionaries, but only 1 went to the top of the class. Vladimir’s eldest brother, Alexander, was hanged at 19 for his complicity in an amateurish 1887 plot against the Tsar. This was the 2nd personal incident which informed Vladimir’s political outlook. His father, shortly before his untimely death, had his livelihood threatened by the reactionary government, which had become fearful of public education.

Vladimir adopting the “Lenin” label during his exile in Siberia (1897–1900), after 14 months in prison for subversive activities. Lenin was derived from the river Lena, which flowed through the area where he was exiled.

Marx supposed that politics followed economics: an interpretation that reflected Marx as a 19th-century economic historian. As a 20th-century revolutionary politician, Lenin posited the primacy of politics over economics.

Marx thought that revolution to communism would be an evolutionary development after capitalism matured, presumably occurring first in the advanced countries of Western Europe. Lenin looked at the problem of sparking revolution more opportunistically.

Whereas Marx assumed that workers’ daily grind would sow the ground for revolutionary class consciousness, Lenin had little confidence that workers would develop politically.

As a Russian, Lenin understood the tepid social dynamics of backward nations. Economically underdeveloped countries were a mass of isolated peasants, lacking social cohesion. Lenin figured that the proletariat, through their own economic struggle, might only make it as far as “trade union consciousness”: not enough to unshackle themselves.

Hence, Lenin looked to a professional revolutionary cadre: “no less professionally trained than the police.” Like law enforcement, Lenin saw the organization of the revolution as highly centralized, able to supervise and control.

Class political consciousness can be brought to the workers only from without, that is, only outside of the economic struggle, outside of the sphere of relations between workers and employers. ~ Vladimir Lenin

It is true that liberty is precious; so precious that it must be carefully rationed. ~ Vladimir Lenin

In Russia before the revolution, a comparatively small army of police kept control over a vast, disorganized populace. This situation led Lenin to believe that a small but highly disciplined revolutionary force could wrest control of the country. The success of the November 1917 Russian Revolution proved him right.

One man with a gun can control 100 without one. ~ Vladimir Lenin

Joseph Stalin succeeded Lenin by eliminating any opposition and taking total control. Political purges progressed from expulsion and exile to execution on a mass scale.

In the late 1920s and early 1930s, Stalin reversed Bolshevik agrarian policy by seizing land and organizing collective farms. This reduced the peasants to serfs, as they had been during the monarchy.

Stalin believed that collectivism would accelerate food production, but farmers resented losing their land and working solely for the state. Millions starved during the famine that ensued. Millions more were exiled to labor camps or executed for their objection. 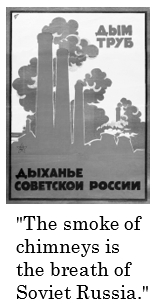 Any whiff of resistance to the regime was swiftly met. And the fumes never seemed to cease – on the farm, in the factory, or among the apparatchiks. 20–60 million were murdered during Stalin’s reign for dissent or simply suspicion of disloyalty. This was on top of the 20 million Soviets killed during the 2nd World War.

Gaiety is the most outstanding feature of the Soviet Union. ~ Joseph Stalin

In sum, Stalin was a ruthless sociopath who ruled by terror. His paranoia pervaded the political system. By the end of Stalin’s reign, only fear held the Soviet Union together. When that fear finally dissolved decades later, so too went the political edifice.

The Demise of the Soviet Union

The whole system was penetrated by the spirit of bootlicking, persecution of dissidents, window-dressing, and nepotism. ~ Mikhail Gorbachev

As Stalin lost his grip in the early 1950s, the Soviet Union stumbled into a regime of back-stabbing collective leadership. Out of the murk rose Nikita Khrushchev.

Khrushchev stunned fellow Soviets at the Communist Party Congress on 25 February 1956 by denouncing Stalin in a stem-winding 4-hour speech. He correctly declared that the Stalin era had been built on deceit, torture, false imprisonments, and executions on a mass scale. The audience left the speech in a state of shock.

Khrushchev consolidated his dictatorship in 1957. His reform attempts went nowhere.

In 1964 Khrushchev was ousted. Kremlin leaders were fed up with Khrushchev’s irascibility, and aghast at his foreign policy failures, most notably alienating China.

Successive leaders could not lift the stagnation that pervaded the Soviet system. The last in line was Mikhail Gorbachev, who took power in 1985. Gorbachev got off to a decent start, but then faltered.

By this time, the Chinese had embarked on economic liberalization while keeping a firm grip on political power. Gorbachev did the opposite: allowing greater political liberties while failing to implement any significant economic reforms.

Gorbachev’s efforts to streamline the Communist system ultimately proved uncontrollable. A cascade of events acted as solvent that dissolved the Soviet Union.

The Soviets were trapped in a quagmire war in Afghanistan that sapped military strength and brought home embitterment. This alone might have proved sufficient in time, but internal incompetence accelerated dissolution.

The town Pripyat in the Ukraine was host to the Chernobyl nuclear plant, which was a monument to Soviet modernization. The town’s symbol was Prometheus, the Greek god who created humans and gave them fire, the first technology.

On 26 April 1986, a test of the Chernobyl plant blew the roof off the reactor, releasing 400 times as much radioactive material as the atomic bomb dropped on Hiroshima. Soviet officials covered up the mishap, as they did any misfortune which cast the country in a poor light.

Firefighters got deadly doses of radiation while heroically trying to put out the blaze at Chernobyl. Children in Pripyat played in the streets and couples celebrated weddings outdoors while an invisible poisonous cloud consumed their health.

The Soviet system disintegrated in the years that followed. At the end of 1991, Gorbachev resigned, declaring his office extinct.

Chernobyl served as a symbol of the toxicity that pervaded a political system built on lies and grasping government officials who served only themselves.

This country was governed and kept together by fear from Stalinist times. Gorbachev put the final blow to the resistance of the Soviet Union by killing the fear of the people. ~ Soviet politician Andrei Grachev