She was a tigress surrounded by hamsters. ~ English Conservative politician John Biffen on Margaret Thatcher 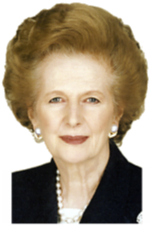 Thatcher was a research chemist before becoming a barrister. She was first elected as a Conservative Party MP in 1959. Thatcher’s drive earned her rapid promotion.

Thatcher’s positions were not always consistent with her party. She supported capital punishment and favored restoring birching as a corporal punishment. (Birching is beating, typically on the buttocks or back, with a birch rod.) Thatcher supported decriminalization of male homosexuality and legalization of abortion but voted against relaxing divorce laws. She voted to ban hare coursing.

Thatcher was a staunch supporter of markets unfettered. She opposed tax hikes, as well as wage and price controls to combat inflation.

When the Conservatives took power in 1970 under Edward Heath, Thatcher was appointed to the cabinet as Secretary for Education and Science. She garnered the public’s attention by cutting the public education budget, most notably abolishing free milk for school children. Opposition MPs cried: “Margaret Thatcher, milk snatcher.”

At the time, the government was spending more on free milk than on books for school. Much of the milk was never drunk, partly because the crates of little bottles were not properly refrigerated, and partly because children’s tastes had moved on from milk.

Labour had already stopped the supply to secondary schools with no public outcry. Thatcher was simply continuing an establish policy.

The Heath government fumbled union demands for wage increases and had the bad luck to be prime minister during the 1973 Arab oil embargo. Heath lost the February 1974 general election. In the aftermath, Thatcher gained party leadership.

In January 1976, in a breathtaking display of anti-diplomacy, Thatcher made a scathing attack on the Soviet Union. From that a Soviet newspaper dubbed her the “Iron Lady,” a sobriquet she gladly adopted.

Later, as prime minister, Thatcher aligned herself with the anti-Communist rhetoric of Ronald Reagan. But she never did trust Reagan after he lied to her about the October 1983 US invasion of Grenada, which she strongly opposed.

Grenada was a former British colony. The UN declared the invasion “a flagrant violation of international law.”

Thatcher took tutelage from economists opposed to the welfare state, and government in general, instead favoring unbridled business. Friedrich Hayek was her favorite: an Austrian-born Brit who embraced classical liberalism. With his simple-minded supply-side economics, Reagan attempted much the same thing.

The incumbent Labour government struggled over the weak economy in the late 1970s. Confidence was lost after a series of strikes in what became known as the “Winter of Discontent” (1978–1979).

In the election that followed, Conservatives won. Thatcher became prime minister on 4 May 1979. Thus began what came to be called Thatcherism.

There can be no liberty unless there is economic liberty. ~ Margaret Thatcher

Thatcher immediately went to work implementing her radical ideological vision, which ran counter to compassion and conventional economic theories. Inheriting a weak economy, Thatcher reduced or eliminated many governmental regulations, and subsidies, to businesses. This purged the manufacturing industry.

Unemployment soared. 1.3 million were out of work in 1979. By 1982, unemployment had doubled. Property crime surged as the destitute struggled to survive.

Britain fell into recession. As it grew deeper, Thatcher increased taxes, to the dismay of most economists: 364 of which publicly condemned her policies.

This lady is not for turning. ~ Margaret Thatcher in 1980

There were riots over these policies that worsened unemployment. Only 23% of the electorate approved of the Iron Lady, the lowest ever recorded.

But unemployment was over 3 million for the 1st time since the Great Depression. Though the economy continued to recover in the next 2 years, the jobs situation did not improve. Unemployment peaked at 3.3 million in 1984.

On 2 April 1982, Argentina’s ruling military junta insanely ordered the invasion of the British-controlled Falkland Islands and South Georgia. It triggered the Falklands War, which lasted all of 2 months; 3 weeks of which involved Britain bringing its warships down from the North Sea. After a few brief battles, Argentina surrendered 14 June.

Though she had neglected the islands’ defense beforehand, Thatcher was a competent war leader. The war inspired confidence in her government, and so was instrumental in the economic recovery that was getting underway (economics being a confidence game).

We always have to be aware of the enemy within, which is much more difficult to fight and more dangerous to liberty. ~ Margaret Thatcher on trade unions

Thatcher was no friend to the working class. According to the BBC, “she managed to destroy the power of the trade unions for almost a generation.” Work stoppages fell steadily during the Thatcher reign, as did trade union membership.

Privatization was a key ingredient of Thatcherism, as was financial deregulation. The aim was to fuel economic growth.

Thatcher sold off government-owned steel and airline companies, and many state utilities (water, gas, electricity, telecoms), but adamantly resisted privatizing rail transport. She changed her mind shortly before her resignation.

Railway privatisation will be the Waterloo of this government. ~ Margaret Thatcher in 1983

John Major implemented the privatization of British Rail that Thatcher had relented to. The Economist magazine later considered the decision “a disaster,” as Thatcher had first feared.

Overall, privatization proved a mixed picture with regard to performance improvement and benefit to consumers. The government increased regulations on the natural monopolies that went private.

Thatcher supported protecting the environment. She helped raise awareness of pollution, acid rain, and climate change in the early 1980s.

Throughout the 1980s, the British government had a windfall from a 90% tax on North Sea oil extraction. Thatcher used it as a buffer to shift taxes.

Her imposition of a poll tax provoked riots in May 1990. Her successor, John Major, abolished the charge.

Thatcher’s reign illustrates how leaders of parliamentary democracies may rely upon short memories. Following on the heels of the Falkland victory, with the economy in an upswing, Thatcher called for an election in May 1983. A divided opposition helped propel her to reelection.

Thatcher was reelected for a 3rd term in June 1987, taking credit for a revived economy. Inflation stood at 4%. Unemployment had fallen below 3 million for the first time since 1981.

In the 1987 election, the opposition Labour Party improved its position considerably from 4 years earlier; but it was not enough to knock Thatcher off her perch.

To me, consensus seems to be the process of abandoning all beliefs, principles, values, and policies. So it is something in which no one believes and to which no one objects. ~ Margaret Thatcher

The Conservative Party was always more popular than Margaret Thatcher. A politician of conviction, not polls, Thatcher’s combative personality and willingness to ride roughshod over colleagues’ opinions sowed discontent.

I don’t mind how much my ministers talk, as long as they do what I say. ~ Margaret Thatcher

Thatcher’s management style was evident in the difficulties she had in handling her cabinet. It led to her downfall.

Howe’s resignation signaled the death knell for Thatcher as prime minister. She was deposed and replaced by John Major as party leader.

Thatcher stayed 2 years in the backbenches as MP, then retired from the Commons.

Besides becoming a highly paid consultant for tobacco company Philip Morris, Thatcher kibitzed on world affairs. Her last hurrah in that regard was to promote the 2003 invasion of Iraq that US President George W. Bush undertook, backed by the current PM, Tony Blair.