Our perception of the world seems so effortless that we take it for granted. But think of what is involved when you look at even the simplest visual scene. You are given 2 tiny, upside-down images in your eyeballs, yet what you see is a unified three-dimensional world. This phenomenon, as the late neuropsychologist Richard Gregory once said, is “nothing short of a miracle.” ~ Indian neurobiologists Chaipat Chunharas & Vilayanur Ramachandran

We can see things because photons bounce off objects. Atoms selectively absorb specific wavelengths of photons (if they don’t eat the photons whole). It’s the photons that get away that can tattle about an object in the distance.

Sight is matter of reflective absorption and translation. That simple statement masks an astounding real-time transformation of intricate quantum information into a visual map of mind-boggling complexity in its construction.

The principle of reflection is well known. There are multiple forms of light reflection; here we note 3: specular, diffuse, and retroreflection.

Contrastingly, diffuse reflection fails to pull off the same stunt: retaining its energy but mystically losing its image memory.

Retroflection sends a photonic packet back to its source with a minimum of scattering. The angle of incidence is incidental. Dew on grass exhibits retroreflection, owing to the droplet’s curved surface and reflective properties on the backside of the droplet.

Some nocturnal animal’s retinas act as retroreflectors (as can be seen by their mirror-like eyes at night). This physics principle effectively improves night vision, though exactly how is a mystery. Come to think of it, everything about vision is a mystery.

The physics and optics of reflection being well understood explain nothing when you examine what goes on atomically. Light energy – a localized field represented by a photon packet – encounters a swirling cloud of electrons covering a gaggle of nucleons which are collectively masquerading as a solid, liquid, gas, or plasma – the form having been decided via molecular consensus from ambient energy pressures (a scurrilous process termed thermodynamics).

What exactly happens to a photon when it violently encounters an atom? Do the electrons – whirling dizzily near light speed – have at it? How does the photon bounce off so precisely? We don’t know. Anyway, from this ghastly happenstance, the photon concocts a story about how it was violated by fermions, and all too willing to tell the sad tale as a saga in waveform.

Photons are packetized fields. Each photon ports its history by its waveform. The shape of the waveform (envelope) that a photon has when it encounters an atom affects its interaction and determines its scattering dynamic (its reflective property). In short, every time a photon is banged up, its story changes. You’d have to be a gullible receptor to believe every photon you eat, but these cells are hungry for stories.

When a photon arrives at its ravenous receiver, it relates a harrowing tale of survival: a violent rebound with only a portion of its spectrum left intact. By what light energy was not absorbed, object luminance and color are conveyed.

Photons are the sacrificial victims of vision. Raped by atoms, photons are then killed for telling what happened to them. For sight involves murdering its messengers: devouring the light that relates its last meaningful encounter.

The human eye can detect a single photon, though it takes 3 to sense a flash of light. A little light goes a long way in conveying enveloped photonic information.

Every incoming spray of photons are bent by the eye’s lens, and then strangely splayed on the retina. To afford peripheral vision, and to be able to see objects larger than the pupil, the light imagery of the world presented on the retina is upside-down and reversed. 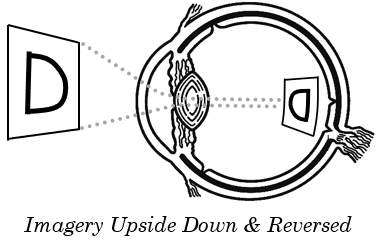 Before being absorbed by the cells that receive the message which light has to offer, photons must first pass through the nerve tissues that act as signal transmitters. The rods and cones that absorb light are at the back of the retina. 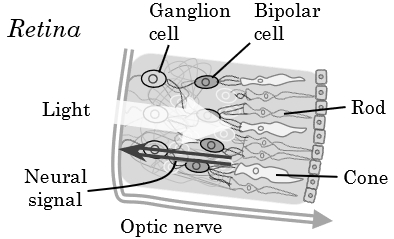 Given that photonic energy is altered by its substantive encounters – the very nature by which vision works – how the light patterns that strike the cornea make their way to the back of the retina unmolested is inexplicable. While retinal tissue layers are largely transparent, various cells that sit in front of rods and cones obstruct incoming photons, doubtlessly altering the wave energy. 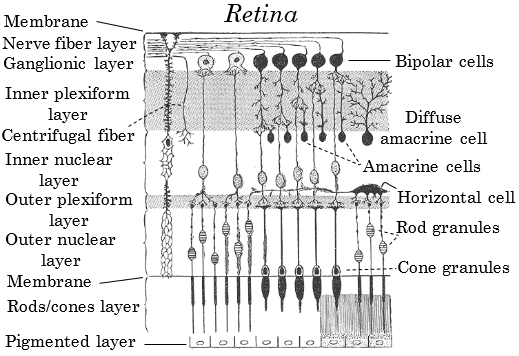 (Though not a primary photoreceptor, ganglion and bipolar cells are sensitive to overall light level (brightness). The hypothesis that the eye is optimized for the myriad of biological trade-offs involved does not address that there is no purely physiological explanation for how human sight can work. See Spokes 4: The Ecology of Humans for more about vision.)

The acuity of vision operates at the outermost bounds of the known laws of physics. Just as rods have been honed by evolution to detect a single photon, so biological vision processing is a mathematical wonder beyond comprehension.