The eye’s photoreceptor mesh is a 200° field. Given that, human visual acuity creates an image corresponding to 1,600 megapixels (million pixels) within a millisecond (1/1000th of a second). (High-definition TV images, such as with Blu-ray discs, are 2.1 megapixels. So, a single visual image brought to you by your eyes is 274 times more detailed than HDTV.) A single such image is assimilated by translating the precise directional sources and complex waveform characteristics of a couple billion incoming photons into an electrochemical cellular depository: an amazing feat. No explanation has ever been made as to how the precise spatial arrangement and atomic intensity of the light that breached the eyeball is electro-chemically transmitted to the brain and mapped within.

If we actually saw what our eyes take in, the world would be a chaotic place. ~ American cognitive psychologists Michael Hout & Stephen Goldinger

What is known is that sight is a mental fabrication: a fact which cannot be contradicted given the limited capacities of the physical tissues involved.

Your only high-resolution vision is in the very center of your eye – about 0.1% of your entire visual field. You are legally blind to objects more than a finger width or 2 from the center of your vision. ~ Stephen Macknik & Susana Martinez-Conde 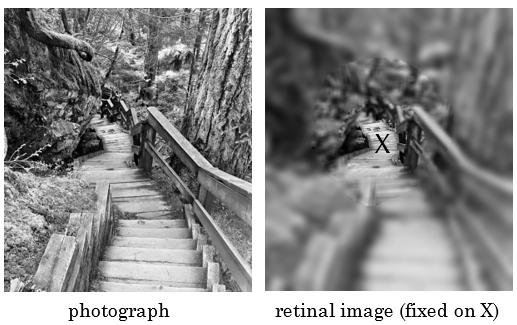 While the human eye is a wide-angle lens, the acuity over most of that range is poor. From physical input, only 15° has any sharpness (in the macula), and only 2º renders high-resolution acuity (in the fovea). Further, the optic nerve creates a central blind spot which is compensated for via multiple snapshots, by the eyes constantly microscopically moving (saccades), which is an autonomic function.

The fovea is well-suited for fine tasks like reading, but, compared to the peripheral retina, the fovea is quite slow in processing visual signals. This slow sensitivity is why we perceive motion in flipbooks and movies. It is also what prevents us from seeing flicker unless we glance from the corner of our eye, where processing is quicker (though resolution is much coarser).

The upshot is that what we perceive as a single static picture is in fact a massive montage, inscrutably assembled. Many thousands of snapshots must be correlated and exactly aligned into a seamless image in less than 1/100th of a second. To do this requires eliminating the extreme distortion caused by the eyes’ lenses, vertically flipping and horizontally reversing the incoming image data, enhancing sharpness for edge detection, balancing light levels, ensuring color constancy, and many other differential processing tasks, so as to detect distinct objects and their relative distances, all in a flawless montage. 1/3rd of the brain is furiously active during the parallel processing that magically creates a vivid panorama.

It’s become quite clear that there are many, many aspects of our visual system that are taking place at levels you might call reflexive, automatic, or subconscious. ~ American neurobiologist David Berson

Given the massive simultaneity of processing involved, ostensibly within the visual cortex, how and where an assembled image physically comes together into coherency remains utterly unknown. But that mystery is just the tail end of how neural signals with insufficient information manage to portray image bits in the first place.

In 2016, researchers used magnetoencephalography to monitor brain activity during visual processing. They found a striking lack of correlation between the imagery presented and its neural representations. Quite simply, they could not demystify vision physiologically when looking at the electromagnetic patterns that transpire when seeing.

Undoubtedly, our current understanding of the neural mechanisms of conscious perception need to be revised. ~ Jean-Rémi King

Further, the visual acuity we take for granted is beyond biological physics. The mind fills in with imagery of its own making.

A large part of the periphery may be a visual illusion. For many basic visual features, this “filling in” is a general, and fundamental, perceptual mechanism. ~ Dutch psychologist Marte Otten