If vertebrate sight as a purely physical phenomenon is inexplicable, consider how much more complex vision is for dragonflies and other insects with compound eyes.

Dragonflies can see in all directions at the same time. ~ Robert Olberg, who specializes in dragonfly vision

Predatory flying insects have a far greater need for speedy sight at high resolution than humans, as they must visually track prey at least as fast as you can wave your hand. A dragonfly attack flight may last only 200–500 milliseconds.

Dragonflies are superb hunters. They track their prey via compound eyes that each have up to 30,000 facets (ommatidia), which are functionally arranged for the different light characteristics of sunlight from above and refraction from below. The sky appears especially bright to a dragonfly to provide a clear contrasting background against which small agile prey can be detected.

The capture of flying insects by foraging dragonflies is a highly accurate, visually guided behavior. Rather than simply aiming at the prey’s position, the dragonfly aims at a point in front of the prey, so that the prey is intercepted with a relatively straight flight trajectory. During prey pursuit, the dragonfly adjusts its head orientation to maintain the image of the prey centered on the “crosshairs” formed by the visual midline and the dorsal fovea, a high acuity streak that crosses midline at right angles about 60 degrees above the horizon. The visual response latencies to drifting of the prey image are remarkably short: ~25 ms for the head and 30 ms for the wing responses. ~ Robert Olberg

Whereas humans have opsins (light-sensitive proteins) for trichromatic (3-color) vision, dragonflies have anywhere from 11–30 different opsins, which render unimaginable color discrimination. They can also detect light’s plane of polarization, which helps them identify and navigate bodies of water. 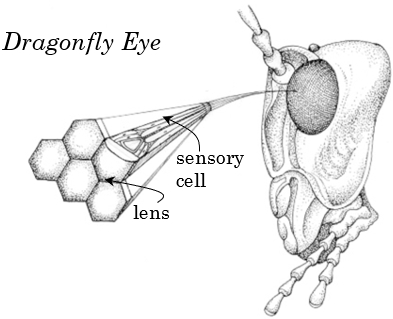 Different opsins are specifically arranged within each ommatidium. This means that dragonfly visual processing is orders of magnitude more complicated than human vision.

Ommatidia are segregated in the compound eye so that the upwards facing eyes has only blue and UV receptors, and the downwards facing eye has receptors for longer wavelengths, such as green and orange. ~ Robert Olberg

Receptors are connected to ocellar nerve dendrites (ONDs). A receptor interprets received photons into an electrical impulse before translating it into an electrochemical signal at its axon terminal, whereupon the receptor prods the dendrite of its correspondent OND.

The OND turns this prompt into an electrical signal, which it sends as sensory input to one of the 2 optical lobes in the brain, where yet another exchange translation – from electrical to electrochemical – takes place. Supposedly, and inexplicably, precise photonic information is accurately conveyed. All told, the optical input process to the brain takes ~2.5 milliseconds.

Assuming physiological processing could do so, over 100,000 optical inputs are precisely spatially and temporally collated within several milliseconds, producing a vivid panoramic image with exponentially more color content than humans can perceive, and light polarization to boot.

Together, these thousands of ommatidia produce a mosaic, but how this is integrated in the insect brain is still not known. ~ English evolutionary biologist GrrlScientist (GrrlScientist wrote this after interviewing 3 of the world’s foremost experts in dragonfly vision: Robert Olberg, American biologist Dennis Paulson, who is interested in the biology of dragonflies and birds, and David O’Carroll.) 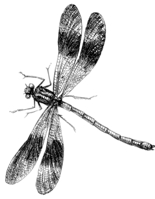 Dragonfly vision is infinitely more complicated than human sight, yet dragonflies manage to see with just 1% of the neurons humans have in their visual cortex. Whereas the human eye has an optic nerve of up to 1.7 million nerve fibers, the dragonfly optic nerve is an information conduit of just 16 neurons.

The foregoing is just a dragonfly taking a snapshot image. Consider high-speed motion detection. A dragonfly can detect a tiny insect moving up to 20 meters away.

Intercepting a moving object requires prediction of its future location. This complex task has been solved by dragonflies, who intercept their prey in midair with a 95% success rate.

A group of 16 neurons code a population vector that reflects the direction of the target with high accuracy and reliability across 360°. A successful neural circuit for target tracking and interception can be achieved with few neurons.

In dragonflies this information is relayed from the brain to the wing motor centers in population vector form. ~ neurobiologist Paloma Gonzalez-Bellido et al, who blithely assumed that dragonfly neural physiology is sufficient for the lightning-fast real-time task at hand

Dragonflies can accurately estimate size and distance to their prey within a few hundredths of a second. Further, dragonflies practice selective attention: screening out useless visual information to focus on a target. This ability was long thought unique to humans.

Dragonfly vision is physically impossible. It is a fantasy to think that 16 neurons manage predation at dragonfly hawking speeds.

Many dragonflies are so agile that they can closely follow the movements of their prey even if the latter are engaged in swarming activity. ~ English entomologist Philip Corbet