The purpose of a visual system is to sample light in such a way as to provide an animal with actionable knowledge of its surroundings. In most cases, this is achieved most effectively by a highly regular 2-dimensional (2D) array of photoreceptors that evenly sample incoming light to produce an accurate representation of the visual scene. The optimal arrangement of a 2D array of detectors is a triangular lattice (i.e., a hexagonal array). Indeed, any deviation from a perfectly regular arrangement of photoreceptors will cause deterioration in the quality of the image produced by a retina. Accordingly, many species evolved an optimal arrangement of their photoreceptors. For example, the insect compound eye consists of a perfect hexagonal array of photoreceptive ommatidia. In addition, many teleost fish and some reptiles possess nearly crystalline arrangements of photoreceptors. ~ Italian American scientist Salvatore Torquato et al 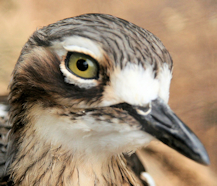 Of vertebrates, diurnal birds have a most sophisticated system of visual cone cells. Their eyes have 4 types of a single cone cell for color vision (violet, blue, green, and red) and double cones to detect light level (luminance). Despite numerous adaptive specializations in the avian eye, the overall arrangement of cone cells in a bird’s eye appears oddly irregular.

The 5 avian cone types exist as 5 independent spatial patterns, all embedded within a single monolayered epithelium. The individual cone patterns in the retina are arranged such that cones of one type almost never occur near other cones of the same type. In this way, the bird achieves a much more uniform arrangement of each of the cone types than would exist in a random (Poisson) pattern of points. ~ Salvatore Torquato et al

The apparent disorder belies a distributive homogeneity. Both retinal cone cells overall and individual cell types are simultaneously hyperuniform in their spatial arrangement. Each set of cones by type, although not regularly arranged, is as uniform as possible given the packing constraints of having 5 distinct cone cell sizes.

A disordered hyperuniform many-body system is an exotic state of matter that behaves like a perfect crystal or quasicrystal in the manner in which it suppresses large-scale density fluctuations and yet, like a liquid or glass, is statistically isotropic with no Bragg peaks. ~ Salvatore Torquato et al

Hyperuniformity is a hallmark of a deeper optimization process. ~ American mathematician Henry Cohn