There are 2 types of equations. One is invented, human made. The other reflects some ‘pre-established harmony,’ which can only be discovered. ~ Alexander Polyakov

In the 5th century bce, Greek rationalist philosopher Democritus formulated a hypothesis about atoms. One of his arguments in support of atomism was that atoms naturally explain the boundaries known as phase transitions, such as ice melting, or hot water steaming away. Democritus rightly conceived that small atomic transforms could actuate large-scale changes: the idea of physical gyres.

At any moment, matter exists in a certain state, which is really a phase, as matter may transform from one state to another via a phase transition. Phase transitions occur with a sufficient change in ambient energy: thermal (heat), mechanical (pressure), and/or electromagnetic.

The 3 states of matter with which we are naturally familiar are gas, liquid, and solid. There is a 4th material state: plasma, which is an ionized gas-like state. While rare in our experience (neon signs excepted), plasma is the most abundant state of matter in the universe. Stars are plasmic, which is to say that the foundry of matter works in a plasmic state. 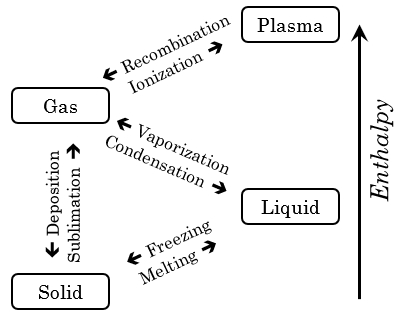 Plasma may be invoked thermally or in the presence of a strong magnetic field. Despite the sustained intense ionization required for its existence, plasma is odd in being conductive while remaining electrically neutral. Of course, one may consider any matter phase peculiar for its properties. Peculiarity is, after all, only a matter of expectation as to how Nature operates. Any law of Nature one conceives is nothing more than an expectation.

In attempting to deal with irreversible processes, non-equilibrium statistical mechanics deals with phase transitions. In principle, the results could be mathematically exact by following deterministic equations, but the underlying complexity of such an approach renders precise solutions difficult to come by.

In 1920, German physicist Wilhelm Lenz challenged his doctoral student Ernst Ising to have a go at modeling the transition of magnetic materials losing their magnetism when sufficiently heated. Heat – thermodynamic disequilibrium – is a common provocateur of phase transitions.

Ising imagined a material comprised of millions of tiny atomic magnets, all aligned, exerting their influence. At a high enough temperature, the alignment broke down, shedding magnetism: a critical point of phase transition.

Ising’s model was insufficient, as it applied only to a 1-dimensional row of atoms. Anything more complex was mathematically overwhelming.

In 1944, Norwegian physicist Lars Onsager solved Ising’s model in 2 dimensions: not only could the model acquire magnetism, but it could also demagnetize above a critical temperature. For such a simple approximation, Onsager’s 2D Ising model proved far more powerful than it had any right to be. It was used to simulate a bewildering array of phenomena that quickly flip between states: from infectious disease dispersal to neuron signaling in the brain.

The race was on to solve the Ising model in 3 dimensions: “something that could open up entirely new fields in mathematical physics,” speculated Israeli physicist Zohar Komargodski.

In the late 1960s, Russian theoretical physicist Alexander Polyakov was studying interactions between fundamental particles. Polyakov realized that they represented strongly coupled systems which could undergo sudden phase transitions. For instance, triads of quarks are bound by the strong nuclear force to form a hadron. Thus enslaved, they tribally serve as the nuclei of atoms. A high enough energy could liberate quarks, freeing them into independence, as they may have once existed in the infant universe.

Polyakov thought that solving the 3D Ising model might provide insight into why atomic matter exists as it does.

Conformal transformations distort space, but leave angles unchanged within small regions, as illustrated by the function cf. If this were true of the 3D Ising model, its mathematical description at a critical point might describe other strongly coupled systems with similar symmetries.

I remember in the 1960s, some senior physicist, a very good one actually, asked me what I’m working on now. I said, I’m trying to understand elementary particles by looking at a boiling kettle. I got a very strange look; obviously he thought that me a crackpot. Nobody believed that it was serious. ~ Alexander Polyakov

Polyakov’s shot in the dark was certainly an odd one. Rather than start with some sense of what a particle system should look like, Polyakov began by describing overall symmetries, and other properties, needed for such a model to make sense. From there he worked backwards to equations. The more symmetries described, the more constrained the underlying equations became. Polyakov’s technique is now known as the bootstrap method, for its ability to generate knowledge from only a few general properties.

Polyakov and his colleagues soon managed to bootstrap a replication of Onsager’s achievement with a 2D Ising model. A 3D version still lay out of reach. Frustrated, Polyakov moved on, and the bootstrap technique became moribund.

By 2008, after extensive fruitless search, physicists were wondering if the mythical Higgs boson actually existed. In trying to build an alternative hypothesis, Russian theoretical physicist Slava Rychkov and his group stumbled upon Polyakov’s discarded bootstrap.

It was one of those lucky moments. We basically said, either we can try to tackle it using the bootstrap, or we will never be able to solve this problem. ~ Slava Rychkov

Solve it they did: 4D conformal transforms. (3D was not feasible because “explicit conformal blocks are not known in odd dimensions.”)

The Higgs boson showed itself in 2012 at the expected energy level (mass). By then, American physicists David Simmons-Duffin and David Poland had gone back to the problem that puzzled Ising: a mathematical description of magnetism at critical points. They hadn’t set out to solve the 3D Ising model. Bizarrely, using Polyakov’s bootstrap technique, their equation system started to reproduce characteristic features.

It seemed to know about the 3D Ising model. This was a big surprise. ~ David Simmons-Duffin

Simmons-Duffin and Poland teamed up with Rychkov and others to carry on. Using the bootstrap method, they constrained key model properties over 1,000 times more tightly than had ever been done, thereby providing the 1st rigorous mathematical foundation for describing 3D systems at their critical points. The achievement was impressive, but for Polyakov a major mystery lingered.

It’s not obvious why it should be so precise. There’s something hidden which we don’t understand. ~ Alexander Polyakov