The Nature of Reality

Consciousness itself is the source of everything. ~ Nisargadatta Maharaj

From the substrate of noumenon ushers all phenomena. The performance of Nature by coherence entertains Ĉonsciousness. This is known because those who become enlightened – those with a clear connection to Ĉonsciousness – invariably feel bliss. If the intent of our lives is to enjoy the show, it is merely an echo of Ĉonsciousness regarding Nature as a whole.

It is the nature of appearance to appear to be real, even though it is unreal. ~ Vasistha

Nature itself is emergent: instantly composed energetically via quantization into fantastically complex structures which appear substantial. This moment-by-moment process is the same as in the mind: atomic symbols, taken as sensation, are assembled into edifices of meaningful representations via perception.

That which is seen is reflection of one’s own consciousness. ~ Nisargadatta Maharaj

We are almost certainly living in a simulation. ~ Swedish philosopher Nick Bostrom

Nature may be construed as a holographic information system, distributed in space and manifesting through time. The existence we experience merely conforms with operating principles of a mind in an entertainment platform.

The mind reflects its environ – coherence having structured mentation for the life form to which it applies.

What we take to be Nature is our own nature. The two are indivisible. The world we see as being without is the world within.

(This observation is validated by the fact that different people may interpret the import of an event divergently. Meaningful representation is an expression of worldview, which reflects one’s mental frame in the moment. Sharing the same event is illusory, as every event is independently perceived. The nature of duality is individuality.)

On the stage of spacetime whirls an endless gyre of desire, with an animated intent: life. With its multifarious meaning, the term organic is ideally apropos: naturally occurring, systemically organized, coordinated, and alive.

A human being is part of the whole called by us universe. We experience ourselves, our thoughts and feelings as something separate from the rest: a kind of optical delusion of consciousness. ~ Albert Einstein

From the perspective of an observer, quantum physics’ uncertainty principle posits the present as particulate, while the future lurks as an indeterminate wave. Whereas the present presents itself in material form, the pending moment is a probability, premised on the undulation at the leading edge of now.

A salient point of the uncertainty principle is in the definition of manifestation: that existence only comes into being with conscious perception. Whether a probabilistic wave collapses into particulate form requires observation. The witnessing of Ĉonsciousness suffices.

This seed Ĉonsciousness is the cause of experience, which in no time takes on the form of the universe. If you see the unreality of this Ĉonsciousness, the experience disappears along with one who experiences. ~ Nisargadatta Maharaj 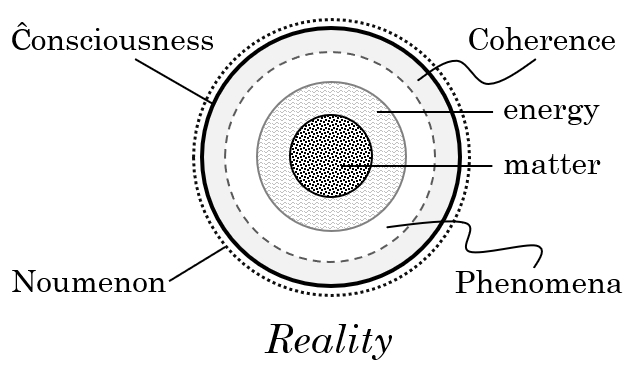 Reality may be construed as a nested hierarchy, with outer layers being forces to what manifests in inner layers. Noumenon is an unmanifested shell to phenomena produced by coherence in the exhibition of Nature.

Coherence is the mathematical, fundamental force for generating phenomena. Coherence creates the interwoven, waveform fabric of energetic existence which naturally quantizes into particulate form as matter. Coherence is the mind of Nature. Like Ĉonsciousness, coherence also localizes.

Ĉonsciousness provides the awareness by which coherence fabricates phenomena. Like matter, Ĉonsciousness manifests in quantized form, as souls in living organisms. The duality of all proximate phenomena is ultimately illusory.

Like a mirror with reflective backing to light-absorbing glass, the power of introspection – silent witnessing of one’s mind – derives from consciousness, which is the interface between noumenon and phenomena. The witnessing capability of consciousness allows introspection, and so provides the basis upon which realization – learning the true nature of self and reality – is possible.

Pure witnessing is unaffected by whatever it contains. ~ Nisargadatta Maharaj