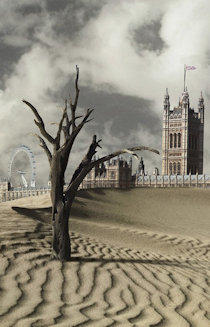 Computer models, whether economic or climatic, tend toward linearity, and typically do not incorporate events which create discontinuities in their prognostications. Economic models have never got the hang of how abruptly recessions occur via financial shock. Climate models have their own challenges in this regard.

Current climate model projections are likely conservative on 3 counts: not factoring in all warming emissions, not fully accounting for warming acceleration even though incorporating feedbacks, and failing to anticipate abrupt events which shift warming into a higher gear.

Discoveries keep being made that increase greenhouse emissions, and thereby show current models projecting short of the mark in future warming. A recent finding of more fluoroform in the air, an incredibly potent greenhouse gas, is exemplary.

In the past half century, nothing about the extent of rising pollution or changing climate has shown sanguinity as justified. Updates have only darkened the forecasts.

Given the state of knowledge in geology, it would be alarmist for climate models to incorporate increased volcanic activity, or other such seismic events, which could abruptly ratchet hotting up. Deforestation, desertification, and wildfires are other events which are hard to predict in extent, yet could have significant impact on the global environment.  Such events are quite possible. Though climatologists warned of increased wildfire activity in Australia, the extent and intensity of the blazes there during the summer of 2019–2020 were shocking.

“A rare but most influential phenomenon in climate change is a sharp shift from one climate state to another. The last glacial period experienced rapid, decadal-scale transitions 20 times from a stadial cold state to an interstadial warm one, called Dansgaard-Oeschger events. There have been a number of views on the mechanisms behind such abrupt changes. One proposed explanation for such events is that they happened when the Earth system reached a critical tipping point. The interaction of ocean thermohaline circulation, ice shelf, and sea ice feedbacks are used to explain the D-O cycles.

“There is an alternative view that the abrupt climatic changes could be triggered by extreme events, such as heat waves, droughts, floods, hurricanes, blizzards, and other events that occur rarely. Paleoclimatic records indicate fluctuations causing rapid transition. It is extremely difficult to predict a sudden transition.”

The bottom line is that climate model predictions should be considered the baseline best case. The scenario of 5 ◦C warming (above preindustrial) by 2100 now showing in the most recent model forecasts could be off by a factor of 3: 5 ◦C by 2050 and 15 ◦C by 2100 may well happen, with the pie of humanity’s doom baked to a crisp well before the model timer indicates.