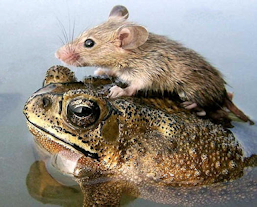 Altruism is common in all kingdoms of life. From an evolutionary perspective, altruism arises when it confers a decided benefit to a population or individuals which practice it.

In the 6th century BCE, Greek fabulist Aesop wrote that “union gives strength.” This concept propels altruism for protecting populations. Bacteria form biofilms and otherwise act altruistically when it improves their collective prospects. When under attack by antibiotics, bacteria warn and help others.

Typically, only a small number of bacteria in a colony are drug resistant. These hardy souls help their more vulnerable comrades survive, even at a cost to themselves.

Bacteria in the human body are known to donate antibiotic-resistant genes to other species of bacteria. Genetic information that gives antibiotic resistance is shared by plasmid transfer to microbial neighbors. Bacteria know exactly the value of what they are sharing.

There is self-interest in maintaining a stable community. A self-respecting bacterium won’t let neighbors be poisoned.

Even viruses act cooperatively and even altruistically. Infection is a risky business, and therefore typically a group endeavor.

Bacteriophages are viruses that infect bacteria. It’s a tough business, as bacteria have sophisticated anti-phage defense systems which recognize and target invaders.

Phages counter with genes that encode proteins which stall the bacterial immune system. To implement these anti-defense viral genes, a phage must enter a bacterial host cell and thwart the immune response.

The virus cannot possibly survive this initial assault to reproduce itself. The virus knows this. The initial attack is a sacrifice gambit. The virus’ compeers will carry on to mount the bacteria’s protein-making machinery once its defenses are down.

Though inclined to a solitary life, social amoebae form slug-like multicellular clusters when food runs short. An amoebae city is known as a slime mold.

To protect an aggregated slug, ~1% of the amoeba cells take on an immune system function: crawling through the slug in search of infectious bacteria. Like later-evolved macrophages, these amoebae police devour invaders, then excrete themselves from the slug, taking the pathogen with them, and dying in the line of duty. Such altruism is essential to the slug’s health.

When it comes time to reproduce, only a small percentage of an amoeba slug form the spores which allow reincarnation. The rest of the population sacrifice themselves to give the best chance to others of their kind to carry on in the next generation.

Altruism is not always self-sacrifice. Manipulation can also produce altruism. Eusocialism in insects evolved through coercion. The earliest queens purposely provided poor nourishment and/or aggressively kept their brood in check. Daughters had little choice but to help mother.

Cooperation and altruism are behavioral byproducts of need – if not in the moment, in recognition that the future is uncertain. Vampire bats share blood with hungry companions, knowing that they may at some time in the future need an assist.

This reciprocal altruism involves reputation. Bats which have not shared when called upon are shunned if they later come begging in need.

For many group behaviors, there are costs that only some individuals bear but ignorance of who benefits. Not knowing the future fosters kindliness.

Many ant colonies begin with a small group of unrelated queens. They coexist peaceably, producing the first generation of workers. But then the queens fight each other until only 1 survives. The cooperative efforts of the dead queens entirely benefit one who is no kin.

A queen who knew her destiny was death without a lineage of descendants would take her chances nesting alone, however dismal the prospects. Not knowing her fate creates the incentive to invest in cooperation.

Ignorance of kin can kindle altruism. A colony of social insects includes different degrees of relatedness when a queen mates with multiple males. Individuals could theoretically identify others of their patriline – full sisters versus half – but they do not. Instead, they cooperate without such bias.

Similarly, a male bird or mammal may assiduously avoid rearing the brood of another male, but in situations where paternity is questionable, or in species that mix broods, males feed offspring without discrimination.

A veil of ignorance – whether of circumstance or about the future – can sow the seeds for cooperation and altruistic effort that might otherwise be missing.

Altruism is an exercise of empathy: a reaction from emotional identification and affinity. Rodents will liberate trapped cage mates even when they have nothing to gain.

Empathy is as innate as selfishness. The two are paradoxical twins that swap priority depending upon circumstance and personality. More broadly, selfishness or sharing is often a social norm.

Macaws are parrots which live in small, stable flocks with a hierarchical social structure. Macaws only selectively share resources. Simians in a similar social environment are also inclined toward selfishness, albeit selectively share with friends.

In contrast to macaws, gray parrots gather in large flocks at night, but selectively split into smaller groups during the day to forage. Having a choice in companions makes a decided difference. Gray parrots are quite inclined to help others as need be.

Neonates will start crying in response to hearing another baby cry. Human infants offer comfort as an empathic initiative beginning at 1 to 2 years of age, after the necessary conceptual mental capacities develop.

Social behaviors, including altruism, easily extend beyond one’s own species given common cause. Bird alarm calls are exemplary. At some risk to the caller, warnings benefit several other species that share the bird’s habitat.

Bird mobbing behavior is an even more overt example. When small birds of various species spot a hawk, owl, or other predator resting in their territory, they mob it, while uttering characteristic clicking sounds that attract other birds to the vicinity. A safer neighborhood benefits all.

While they compete for turf and sunlight as saplings, plants know the value of community. Related plants in many species share resources as a habitual practice. But even unrelated plants share information and help others, especially when they sense a communal threat.

Many species of birds, rodents, and primates practice altruism even if close relations are not involved. Capuchin monkeys are tolerant of friends coming by and taking some of their food. Caged capuchins will share food with another in an adjacent cage, especially if the sharing has been reciprocated in the past.

Many animals, inherently emotional, have an aptitude toward altruism, however seldom it finds expression in those who lead largely asocial lives. This inclination is even more integral in social animals, and especially those with parental care.

Altruism is an aspect of social psychology. For the socially inclined, sharing feels good: an intrinsic satisfaction that defies outcome-oriented ‘rationality’.