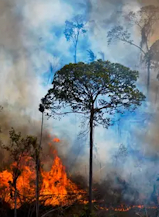 The world’s largest river basin, Amazonia once had half of the world’s rainforest. The Amazon is quickly being reduced to wooded patches and scrub lands.

The Amazon rainforest arose over 66 million years ago, when the Atlantic Ocean had widened enough to provide a warm, moist climate to the Amazon region. The rainforest once covered 5.5 million km2. By 2020 the rainforest had been reduced 50%.

That pace of destruction is accelerating with government encouragement. Following the election of Jair Bolsonaro as Brazilian president in 2018, Amazon deforestation quickened by 1/3rd.

In the past 2 years, several thousand fires have been set to destroy the forest. This has sent smoke clouds across the region, darkening skies all the way to São Paulo, Brazil’s largest city. The fires in 2020 so far are up 60% over 2019, which was a flaming year.

The cleared land is used to raise cattle and crops to feed the beasts. Brazil is the world’s biggest beef exporter.

“Forests create their own rain because leaves give off water vapour and this falls as rain further downwind. Rainfall means fewer fires leading to even more forests. Drier conditions make it harder for the forest to recover and increase the flammability of the ecosystem,” explained Swedish environmentalist Arie Staal.

Major portions of the Amazon are near ecosystem collapse as a rainforest. Soon there won’t be enough tree cover to cycle moisture throughout the forest, which will then dry out and degrade into savanna.

The Amazon has been a cooling influence on global temperatures for millions of years. No more. Soon the region will cease to be an environmental asset and become another man-made liability.

“Rainforests on all continents are very sensitive to global change and can rapidly lose their ability to adapt. Given that rainforests host the majority of all global species, all this will be forever lost,” laments Swedish environmentalist Ingo Fetzer.

Fiona Harvey, “Amazon near tipping point of switching from rainforest to savannah,” The Guardian (5 October 2020).

Jonathan Watts, “Ecosystems the size of Amazon ‘can collapse within decades’,” The Guardian (10 March 2020).

Umair Irfan, “Brazil’s Amazon rainforest destruction is at its highest rate in more than a decade,” Vox (18 November 2019).