Official US employment figures are fictitious. Unemployment is at least 4 times worse than official figures state. The numbers paint a rosy picture while a sizable chunk of the American population lives in economic misery.

Adult unemployment in the US 1977–2015 averaged around 22%, with sharp increases in the wake of economic downturns. The youth employment rate is twice that of adults in their working prime. 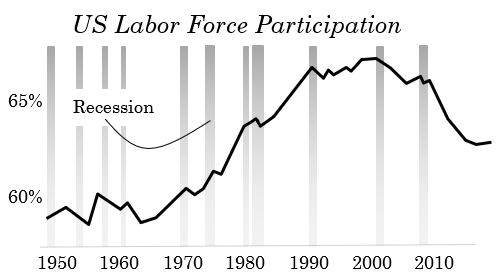 In the past economic upturn, employment has nudged up; but much less than reported (as a percentage of the labor pool). At least 1/3rd of the working class is without a job or has a lousy, low-paying job.

If someone does not register with a state agency as looking for job, that individual is counted as employed. Most unemployed people not eligible for unemployment benefits don’t bother registering their economic plight with the state. The New York Times: “America has a large shadow labor force.”

By publishing false figures, the US government makes capitalism seem more viable than it is – bogus boosterism. Gullible economists and journalists buy the lie.