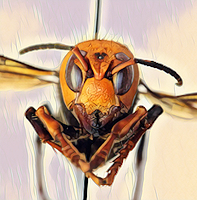 The Asian giant hornet is the largest hornet. An adult may be 4-5 cm long. Native to Asia, the hornet has made its way to North America’s Pacific Northwest.

The Asian giant hornet (Vespa mandarinia) is often confused with the yellow-legged hornet (Vespa velutina), also known as the Asian hornet, a species which has invaded Europe. All true hornets are in the genus Vespa, of which there are 7 species and numerous subspecies.

Like other social wasps, hornets build communal nests of papery pulp made by chewing wood. Each nest has a sole queen, who lays eggs and is attended by workers. The workers, while genetically female, cannot lay fertile eggs.

Most hornets make exposed nests in trees and shrubs, but a few, including the Asian giant, build their nests underground or in other cavities. A closely related subspecies in Japan, known as ōsuzumebachi (great sparrow bee), nests in trees.

In the tropics, nests may last year-round, but in temperate areas, the nest dies over the winter, with lone queens hibernating in leaf litter or other insulative material until the spring.

Female Asian giant hornets have a formidable stinger 6 mm long which dispenses a neurotoxic venom termed mandaratoxin. The hornet can sting multiple times and deliver nearly 7 times the volume of venom that a honeybee can muster.

Females are especially aggressively territorial during the autumn mating season. Male hornets are docile and do not have stingers.

Hornet diets include nectar and sugar-rich floral foods, including sap and fruit. Adult hornets also attack insects, which they kill with stings and their jaws.

Owing to size, ferocity, and potent venom, hornets can kill large insects without difficulty. Rather than being eaten by an adult hornet, a victim is chewed into a paste and fed to larvae.

The Asian giant hornet is the only known social wasp to mark food sources with a scent to guide others. This trait likely evolved because this hornet relishes honeybees for food. A single wasp would be overwhelmed by honeybees who would encircle the wasp and suffocate it. So, the Asian giant attacks as a ravaging horde.

These hornets routinely fly miles from their nests – at speeds of up to 20 mph – to locate a bee colony and mark it with a scent that attracts allies.

The Asian giant also favors other eusocial wasps for food. Workers may capture the larvae of bees and other wasps to feed to their own.