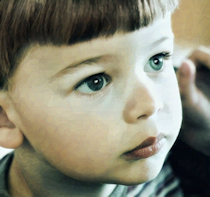 Children attend to all that goes on. Range of attention naturally narrows into adulthood.

“Parents recognize that children notice everything, even when you wish they wouldn’t,” noted psychologist Vladimir Sloutsky. Contrastingly, adults are better focused at the expense of missing what was considered insignificant.

Not knowing what might be important, children lack filters of focus. “By being attentive to everything, children gather more information which helps them learn more,” observed psychologist Nathaniel Blanco. Broad attention maximizes uptake.

Learning all that they may is what young children need to do to prepare for adulthood; hence, broad attention. Contrastingly, adults need focused concentration to get work done. Thus, attention scope adaptively contracts with age via learned inattention.

Adults are capable of broad attention, but most surrender their lives to their minds, which increasingly take control, beginning around age 5. Few adults lack the discipline for broad attention unless in an occupation where that skill pays dividends, such as law enforcement.

Attention scope also has a cultural aspect. In a study designed by American social psychologist Richard Nisbett, American and Japanese students were shown color animations representing scenes of swimming fish. Each scene featured a “focal” fish among other fish. The focal fish was bigger, brighter, moved faster, or was otherwise outstanding among the other fish.

When asked to describe a scene, the Americans pointed out the focal fish. 70% more often, the Japanese also described the other fish, or the background rocks and plants – that is, the overall environment.

The students were then shown objects that had been in the scenes by themselves, in isolation. American students readily recognized the objects, whereas the Japanese were better able to recognize an object in context of the holistic scene.

The study measured how quickly objects were recognized: a test of autonomic perception, beyond conscious control. When the objects were placed against a new background, not part of an original scene, Japanese students made mistakes. Americans did not.