Plants adapted to the presence of bats in at least 2 ways: to make it easier for bats to rid plants of potential pests, and for pollination services.

Different bats have distinctive echolocation styles. Cave-dwelling bats, such as fruit bats, make quick echolocation clicks by popping the tongue from the floor of the mouth to the roof. Bats that feed upon flying insects have a more pronounced clicking action: one that lasts 5 times that of the quick pop of cave bats. The longer signal is better for detecting flying prey than for navigating obstacles.

Some plants shape their leaves to have a distinctive echolocation signature. This helps bats pick insects off leaves. “To bat’s ears, echoes from prey are enhanced, while those coming from the leaves are effectively reduced,” remarked Canadian zoologist John Ratcliffe. 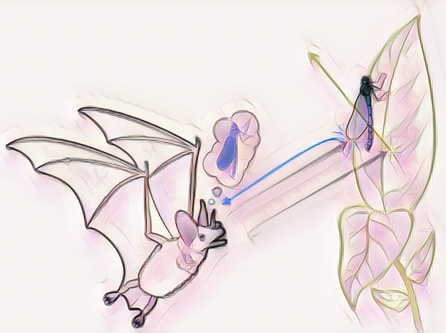 Over 40% of insectivorous bats hunt by plucking prey from leaves and other surfaces. Bats know to angle their approach on leaves to get a good reading. Banging echoes perpendicular to a leaf (at 90◦) fails to paint a decent picture of a still insect perched on a leaf. But at 60◦, a bug stands out, as the leaf reflects its own echoes away.

The Cuban tropical vine Marcgravia evenia has a unique disk-shaped leaf. For nectar bats foraging by echolocation, the leaf produces an echo signature which can be clearly differentiated from the echoes produced by background foliage. This reduces bat search time by half in finding the vine they were looking for. Somehow the Cuban tropical vine knew exactly who its customers were and catered to them.

In the cloud forests of the Ecuadorian Andes mountains live nectar bats. Many varieties of these bats have tongues that reach 3.9 cm. One, Anoura fistulata, has a tongue that can extend to 8.5 cm: 150% of its body length, comparable only in tongue length to a chameleon. When not in use, the bat stores its tongue in a special tube in its thorax. With its extra-long tongue, the nectar bat can dine on the flowering Centropogon nigricans, which stores its nectar at a depth only the tongue of A. fistulata can reach.