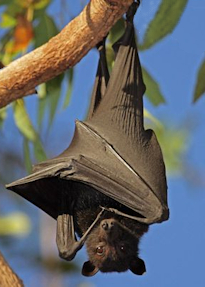 Bats have wondrous immune systems which are perpetually primed to handle viruses without getting sick. This training ground makes viruses more virulent.

Viral infection in bats leads to a swift response that walls the virus out of cells. While this protect bats from being infected with high viral loads, it encourages viruses to reproduce more quickly within a host before a defense can be mounted, and to work out other ways to evade immune system detection or response.

This makes bats a unique reservoir of rapidly reproducing and highly transmissible viruses. Whereas bats can tolerate virulent viruses, when these bat viruses then move into other animals which lack such a high-caliber immune system, the viruses quickly overwhelm their new hosts, leading to high fatality rates.

“Some bats are able to mount this robust antiviral response, but also balance it with an anti-inflammation response,” says Brook. “Our immune system would generate widespread inflammation if attempting this same antiviral strategy. But bats appear uniquely suited to avoiding the threat of immunopathology.”

As the only flying mammal, bats elevate their metabolic rates in flight to a level that doubles that achieved by similarly sized rodents when running.

Typically in animals, high metabolic rates and vigorous physical activity lead to higher tissue damage, due to an accumulation of reactive organic molecules, notably free radicals. In the evolutionary developments enabling flight, bats developed physiological mechanisms to efficiently defuse these destructive molecules. This has the side benefit of efficiently mopping up damaging molecules produced by inflammation of any cause, partly explains bats’ especially long lifespans.

Rapid tamping down of inflammation has another perk: limiting swelling related to antiviral immune response. One key trick of bat immune systems is the sensitively responsive release of a signaling molecule which tells other cells to be on alert for viral incursion.

“When you have a higher immune response, you get cells that are protected from infection. So the virus can ramp up its replication rate without causing damage to its host. But when the virus spills over into something like a human, we don’t have those same sorts of antiviral mechanism, and we could experience a lot of pathology,” explains Brook.

Disrupting a bat’s habitat stresses them, whereupon the bats shed even more virus in their saliva, urine, and feces that can infect other animals. “Heightened environmental threats to bats may add to the threat of zoonosis,” relates Brook.

China has been a progenitor of several viral outbreaks because of Chinese taste for exotic meats and traditional medicines which use animal parts. Poachers carelessly disturb forests as they catch various forest creatures and cage them, whereupon the captured animals may suffer in close proximity for days.

“The bottom line is that bats are special when it comes to hosting viruses,” concludes American disease ecologist Mike Boots. “It is not random that a lot of these viruses are coming from bats. Bats are not even that closely related to us, so we would not expect them to host many human viruses. But bat immune systems could drive the virulence that overcomes this.”