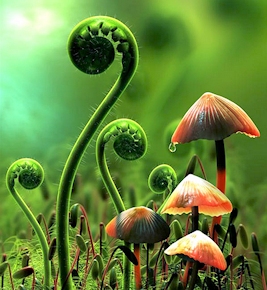 The germ theory of disease originated in 1546, when Italian physician Girolamo Fracastoro (1476–1553) hypothesized epidemic diseases were caused by infectious seeds of some sort. Since that time, bacteria and viruses came to be microbial evil incarnate. Only in recent years have bacteria redeemed themselves a bit by discovery that they define digestion, regulate physiology, and that humans are mostly made up of them. Now it is viruses turn.

There are more viruses alive than all organisms combined. (Viruses are not organisms, as they are obligate parasites lacking the means for metabolism and reproduction. But, as their virility proves, they are quite alive.)

Generationally, there are two types of virus: acute or persistent. An acute virus is passed between living organisms. A persistent virus is passed down from one generation to the next, such as by a plant to its seeds.

While acute viruses have long been considered the overwhelming mode of transfer, persistent viruses are just as common; at least in plants. Not enough is known about animal viruses.

Plants have a long history of domesticating every life form they come in contact with. Insects and other animals pollinate them. Many animals disperse their seeds. Humans practice agriculture, albeit in an ersatz manner (poor soil management, mono-cropping, environmentally damaging genetic modifications).

Those creatures that can’t be bought off with fruits and other sugary confections like pollen are put down with secondary metabolites: some of which humans call herbal remedies, as they are naturally-occurring pesticides.

Viruses are a tough crowd, not easily cowed. But plants have partnered with some of them.

Persistent viruses help plants by conferring drought and heat resistances. In the instance of heat resistance, a grass plant was studied that has a symbiotic relationship with a fungus which harbors the virus. Without the virus, the plant wilts in the heat, even if the fungus is attendant.

Such relations have only just been discovered. Now that the hunt is on, more mutualisms between plants and viruses will be found.

Ishi Nobu, Spokes of the Wheel, Book 2: The Web of Life (pre-publication).