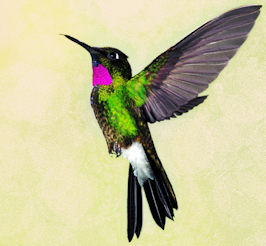 The visual richness of Nature owes to color. The applications of color in life forms clearly indicates that there is a force of design behind the exhibition of existence.

The colors of plants and animals are produced by pigments and nanostructures which reflect light in specific ways. One purpose of coloration is camouflage: conveying an illusion.

Some plants hide their tender, tasty shoots from herbivores by giving them a reddish color. Mammal herbivores cannot see red. Instead, such a shoot looks a decayed yellow: certainly not worth taking a bite of. Somehow the adaptive force behind plant evolution understands animal vision limitations.

More dramatic are deliberately crafted displays of color by animals to achieve an effect. Over the course of a few hours, horned ghost crabs in the sea around Singapore change color to match their background. How they know to create just the right level of reflective luminance to make themselves indistinguishable from their background is a mystery.

Cephalopods have impressive control over their coloration. Some cuttlefish quickly change color and shape according to the predator they are faced with, thereby maximizing their concealment for a specific observer.

Some damselfish have ultraviolet (UV) face patterns which facilitate individual recognition for preserving territoriality among conspecifics, while remaining largely hidden to UV-insensitive predators. Similarly, some mantis shrimp have covert polarized patterns which are invisible to other species. “The same color pattern can be perceived differently by different receivers, and this can be exploited by organisms to resolve different challenges simultaneously,” marveled English zoologist Tim Caro.

Pigment isn’t the only way to get color. Specific molecular structures of certain materials reflect and refract light in distinctive ways. Iridescence is achieved by microscopic structures which generate color by diffraction and/or interference.

Feathers are made of keratin: the same material as our hair and nails. Bird feathers resemble tiny trees, with parts resembling a trunk, branches, and leaves. Feather barbules are the leaves. Barbules have cells containing pigment organelles called melanosomes. Our melanosomes produce the dark melanin pigment which colors our hair and skin.

The shape and arrangement of melanosomes can influence the way light bounces off them, producing bright colors.

Hummingbirds display impressive iridescence which arises from the special shape of the melansome structures in their feathers. “These colors are produced by optically complex stacks of hollow, platelet-shaped melanosomes,” said American evolutionary biologist Chad Eliason.

Several plants produce nanoscale ridges on the surfaces of their flower petals to create a blue-to-ultraviolet color effect that pollinating insects can see. This ‘blue halo’ is an effective advertisement in attracting a desirable clientele.

“Disorder itself is what generates the important optical signal that allows bees to find the flowers more effectively. Petal ridges that produce ‘blue halos’ evolved many times across different flower lineages, all converging on this optical signal for pollinators,” explained English botanist Beverley Glover.

Insects use their sensitivity to polarized light in several ways, from general navigation to finding food and nesting sites. Knowing this, flowers often display polarization patterns that emerge from micro-differences in geometric surface structure.

Many animals can rapidly change color: to communicate, camouflage, or regulate their temperature. Only a few can actively tune the color of their skin at will. Squid are a notable example; so too chameleons.

Chameleons have 2 layers of specialized cells called iridophores. Each layer has light-reflecting nanocrystals. The deeper layer reflects a broad range of wavelengths, albeit biased toward red.

By altering the spacing between the crystals in the upper layer, cells shift from reflecting blue light to reflecting yellow or red. This creates a skin color change from green to yellow or orange.

A chameleon may quickly switch between camouflage or an ostentatious display to attract mates or expel a rival. It does so by mentally tuning specific skin cells; an astonishing feat that defies purely physiological explanation but becomes plausible when considering the mind controlling energy waves, with correspondent physical activity.

With great diversity, different life forms exhibit colors that work in predictable ways. Specific color signaling is received in the way intended: purposeful in conveying information that achieves a desirable effect for its sender.

So often, hidden information is involved in arriving at an adaptation: some knowledge of effective interaction that inspires a particular trait. Such is the instance of plants hiding delectable shoots in plain sight. What the capacity for camouflage and other color effects indicate is that there is intelligent design work being done: a force behind Nature enabling coherence for clever display. That much is obvious.

“A purpose, an intention, a design, strikes everywhere even the careless, the most stupid thinker.” ~ Scottish philosopher David Hume (1711-1776)