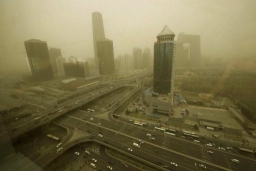 The United States space agency NASA has taken a peek at the Earth below, and found: “the stretching of resources due to the strain placed on the ecological carrying capacity” as well as “the economic stratification of society into elites and masses (or ‘commoners’).” In that regard, “accumulated surplus is not evenly distributed throughout society, but rather has been controlled by an elite. The mass of the population, while producing the wealth, is only allocated a small portion of it by elites, usually at or just above subsistence levels.”

The NASA-sponsored study is to be released in the journal Ecological Economics, controlled by elite rent-seeking publisher Elsevier.

Historically, the study found: “The fall of the Roman Empire, and the equally (if not more) advanced Han, Mauryan, and Gupta Empires, as well as so many advanced Mesopotamian Empires, are all testimony to the fact that advanced, sophisticated, complex, and creative civilizations can be both fragile and impermanent.”

Technology is often looked to as a savior for the excesses of mankind (women never mattering much, except as sex objects). The study rains on the parade of high-tech salvation: “Technological change can raise the efficiency of resource use, but it also tends to raise both per capita resource consumption and the scale of resource extraction, so that, absent policy effects, the increases in consumption often compensate for the increased efficiency of resource use.”

Modeling a range of different scenarios, the study cautiously concludes that “collapse is difficult to avoid.” The difficulty comes from those heavily vested in the status quo.

“While some members of society might raise the alarm that the system is moving towards an impending collapse and therefore advocate structural changes to society in order to avoid it, elites and their supporters, who opposed making these changes, could point to the long sustainable trajectory ‘so far’ in support of doing nothing.”

That’s all from these starry-eyed malcontents, bent on bringing a bum rush to the boon that capitalism brings to its elite, and its sycophants that roam the halls of political administration, always on the lookout for a hand-out to stay in power. Democracy may signify freedom, but buying votes is expensive.

Things to look forward to: worldwide water shortages; sea level elevation that will bath most coastal cities; mass extinction of many species, thanks to accelerated habitat destruction; developing countries catching up with industrialized nations on generating pollution and destroying their local environments; the rich getting richer while the poor get poorer; business as usual.