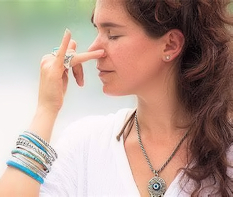 Breathing through the nose is yogic.

The protrusion in the middle of your face is a promenade for proper air flow. The nose is designed to trap dust and other debris, and thereby clear the air. Behind the visible nose lies the nasal cavity, a cavernous space the size of a gaping mouth. This cavity is lined with folded membranes which modulate the air to body temperature, add moisture, and trap pathogens.

Your sinuses – air-filled spaces connected to the nasal cavity – swirl the air around more and add nitric oxide, which kills bacteria and viruses and relaxes the blood vessels in the respiratory tract, thereby infusing more oxygen into the blood.

Nose breathing adds 50% more air resistance than breathing through the mouth. That exercises your heart and lungs and increases the vacuum in your lungs, letting you to draw in up to 20% more oxygen.

Pranayama are yogic breathing techniques which originated in ancient India. The term prana is Sanskrit for life force or vital energy; yama is to extend or draw out.

Yoga is a bodily meditation practice. Through physical postures, yoga aims to focus the mind and so silence it, allowing moments of transcendence. A detriment to some modern yoga teachings is making the poses the locus of practice, rather than yoga being a form of meditation.

Practicing pranayama may be used to settle the system before easing into meditation. One technique is alternating breathing through alternate nostrils.

The only time that nose breathing falls short is when you’re out of air; then, a gasp of air works wonders.

Many miss out on the benefits of proper breathing. An estimated 50% of children and 60% of adults breathe too often through their mouths.

Caroline Williams, “How to breathe your way to better memory and sleep,” New Scientist (8 January 2020).