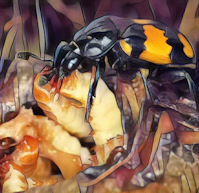 Burying beetles have complex parental care practices. Both parents provide diligent nurturing; though, as in birds and humans, females take the lead.

Burying beetles find a carcass, usually a small bird or mouse; a prize worth fighting for – and they do. Mating pairs pair off as rivals: female against female, male against male. The larger contestants typically triumph. The winning pair gets the spoiled spoils, which is buried (hence the namesake) to remove it from further competition.

The burying beetle couple then busy themselves building a nursery: dig a hole under the corpse into which the kill collapses; curve the corpse into a circle; remove all the hair; coat the body with antibacterial and antifungal secretions from their saliva; eat enough of the corpse to create a cavity. The preparation process may take 8 hours.

A couple of days later, the female lays her eggs into the cavity. A parent – usually the mother – watches over the eggs.

The eggs hatch into larvae, which feed upon the corpse.

Although the larvae can feed themselves, both parents practice progressive provisioning: digesting flesh and regurgitating liquid food for the larvae to feed on. Parental secretions may also benefit the youngsters.

Such hubbub helps grow the grubs. The adult beetles feed and protect the larvae for several days, until they are ready to move into the soil and pupate.

A few larvae get greedy, pestering their parents for more than their share. These younglings are cannibalized for their temerity, engendering more honest communication about apportioning food. “Parental care is hard work, so it makes sense not to expend more energy than is necessary if there is a good chance you will get an opportunity to breed again,” reasons English behavioral ecologist Nick Royle.

Older male beetles make more diligent parents than younger ones, particularly when paternity is uncertain. More breeding opportunities lay ahead for beetles in their prime. An elder beetle may be tending his last brood, and so takes extra care. “For older beetles that may not get the chance to breed again, the best strategy might be to invest everything you have, regardless of the situation,” says Royle. “It certainly provides some incentive for females to want to mate with older males,” notes English evolutionary biologist Megen Head.

If the carcass is large enough, several beetle pairs will cooperate to bury and breed a communal brood. Conversely, if pickings are slim, parents cull their young early on, to match the number of larvae to the size of the supply carcass, carefully estimating enough food to go around to pupation. Burying beetles are both caring parents and killer calculators.