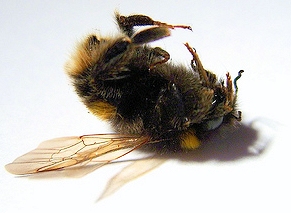 Pollination is essential to two-thirds of the world’s food crops. Commercial bee hives are often relied upon, but unkempt insects, including bees, beetles, flies and butterflies, are important, as the wild things are more productive pollinators.

Pesticides and herbicides, blithely applied worldwide, are indiscriminate killers. Ironically, considering their intended benefit, crop yields are declining because of their use.

In the United States, large-scale bee-colony collapse has been well documented for nearly a decade, but its cause was a puzzle, as researchers failed to point to the obvious culprit: chemicals used to control pests and weeds.

The pesticide DDT was considered a salvation until its mass murder up the food chain was politicized in the 1962 book Silent Spring by Rachel Carson. It took a decade of acrimonious debate before DDT was banned in the United States, thanks to politicians’ natural inclination to consider corporate interests as paramount.

The companies that pump out herbicides, fungicides, and insecticides compete to make the most the potent products. The current generation of powerful pesticides come from tinkering with nicotine by Shell in the 1980s and Bayer in the 1990s.

Neonicotinoids, hailed as the new salvation, are now the most widely used pesticides in the world. These nervous system destroyers are slow to break down: possibly retaining potency for years.

The US government has done nothing so far over neonicotinoids. The US Environmental Protection Agency (EPA) was sued earlier this month by four beekeepers and five environmental and consumer groups over the EPA’s failure to review these products. One of the suit plaintiffs observed: “America’s beekeepers cannot survive for long with the toxic environment EPA has supported.”

Half of the bee hives needed to pollinate the nation’s fruits and vegetables have been killed off in the past decade. CropLife America, which represents over 90 pesticide producers, stated that research on neonicotinoids “supports the notion that the products are safe and are not contributing in any measurable way to pollinator health concerns.”

That’s quite a notion. The American Bird Conservancy published a review of 200 industry research studies on neonicotinoids. Their conservative conclusion was a call for banning neonicotinoid use on seeds because of its toxicity to a wide range of wildlife, including birds.

Research suggests that neonicotinoids damage human health, especially brain development. Nicotine is a known neurotoxin of brain development. It should thus come as no surprise that commercially produced nicotine derivatives, tweaked to supercharge toxicity, are potent neurotoxins to many forms of life.

The short of it is that this new supposed crop saver is as destructive to the environment as DDT.

A few European countries (Germany, France, Italy) have selectively taken tentative steps against a few neonicotinoids, notably its application on seeds. But just this month, the European Commission voted for corporate hegemony. Germany and the UK led the refusal to ban neonicotinoids, even after the European Food Safety Authority deemed the killer chemicals an “unacceptable” danger.

The Impact of the Nation’s Most Widely Used Insecticides on Birds, American Bird Conservancy (March 2013).

Damian Carrington, “US government sued over use of pesticides linked to bee harm,” The Guardian (22 March 2013).

“Bees, fruits and money: decline of pollinators will have severe impact on nature and humankind,” ScienceDaily (3 September 2012).