Clarity: The Path Inside 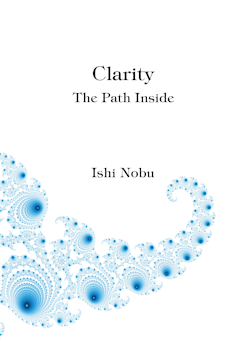 Clarity: The Path Inside is a brief, 2-part book. The 1st part explains reality, and why Nature is as it appears. The 2nd part is a practical guide to enlightenment. Timeless wisdom succinctly put, Clarity is the book that spiritual seekers have been looking for.

People suffer because they do not see themselves, and the world, for what it is. By comprehending reality, you can see yourself for what you truly are: a continual process of being in the cosmic entertainment production known as Nature.

The path to enlightenment is the discipline of mastering the mind. Live in meditation: joyfully aware in the present moment, with a quiet mind which serves you, rather than you being at the mercy of your mind.

Clarity can guide you to where you want to be.

Read Clarity: The Path Inside online. Download the pdf. Buy on Amazon.

From the section on The Architecture of Entertainment:

An eternity of nothingness would be the epitome of monotony – whence Nature: the exhibition of existence.

The one thing upon which all agree is that Nature has an order. The process of sussing Nature’s little secrets is endless because Nature is infinitely intricate. Despite the mind-boggling complexity, Nature’s fundamental architecture is apparent. There are indispensable ingredients for existence as an entertainment platform: diversity, continuity, entanglement, consciousness, the will to live, desire, jeopardy, ignorance, and the mind.

From the subsection on The Mind:

There is a master of ceremonies for your life: your mind. The mind is everything: perceiver, deceiver, and deliverer. All that you experience, all that you think you are, all that you will ever know, lies within your mind.

As an aspect of feeling jeopardy, delivering distress is part of the mind’s job. The mind is not just a spectator and problem-solver (willmind). Instead, through cunning tied to your emotional attachments, the self-activating agent of the mind (nattermind) preys upon you, fabricating fears and hopes through fantasies. Your mind is the one who tells you how important certain things are and how you should feel about those things. Then the mind plays you. You know too well how the mind prattles at you, telling you things that have not and will not come to pass.

You are either a creature of the mind, or its employer: either master or slave. The Collective are serfs who often believe themselves to be masters. Those who suffer but feel comforted by the false belief that they know what is going on live in smug ignorance. It is a cage built by the mind.

From the section on Beliefs:

A belief is faith in selective facts: data which the mind has chosen as credible. Beliefs are shakier than facts because beliefs, as a conglomerated construction, are always a simplification of the facts upon which they are based. The mind likes beliefs because they are relatively easy to use. By contrast, by their sheer numbers, facts represent a mental management problem. The mind deals with largely redundant memories by merging them into a composite representation, forsaking accuracy for usability.

Beliefs are entirely unnecessary. You can witness the world without believing any of it, and function better by skepticism than with the faith and expectations that are beliefs’ traveling companions. Like emotions, your mind promotes beliefs to keep you in ignorance, and so let the mind maintain its control of you.

There are 3 alternate responses to the mind’s promotions. 1st, generally believe what comes to mind. Many in the Collective do just that, with relatively rare disavowals of the mind’s pandering. They do so from faith in their pignorance, a comfortable obliviousness.

2nd, selectively decide which of the mind’s fabrications to believe. The more discriminating of the Collective attempt this problematic endeavor. Psychologists remind their patients suffering from the tortures of nattermind that “it’s all in your mind,” and suggest for relief more pleasant fictions which the mind may concoct. The skeptic who suffers a delusional indulgence in his cleverness proudly adopts the modus operandi of thinking he is rationally deciding what is worthy of belief, while unquestioningly accepting the bulk of the mind’s presentations hook, line, and sinker. It is ludicrously ironic to have the mind decide which abstractions are to be believed.

3rd, don’t believe anything. Trusting someone who has repeatedly lied to you is foolhardy. The untrustworthy mind is no different. Not believing is the only reasonable course. It is idiotic to argue over whether believing thoughts is reasonable or not when reason is itself a product of the mind.

The utility of certain facts is indisputable. Useful knowledge is the basis for skill in manipulating those aspects of actuality which may be tinkered with to some satisfaction – arranging what furniture in the world you can to suit yourself.

From the section on Schools of Thought About Reality:

Neurobiologists monitor the energy flowing out the scalp during mentation and imagine that nerve cells collectively fabricate cognition. That the patterns observed do not correlate with the coinciding thoughts, and that the absurd assumption of neurons as responsible for cognition has no factual foundation, do not bother neurobiologists a whit. The religious dogma of neurobiology has been widely publicized and generally accepted despite it being an obvious hoax.

Under matterism, you live as a bony meat sac and die. End of story.

Though they both loosely fit with how the world appears, matterism and dualism are fundamentally different conceptions of reality. Dualism touts the dualities which are obvious: between mind and body, and between self and environment.

Matterism is instead a monism, claiming a unity, where the material world is all that there is: that actuality is reality. Dualism doesn’t quite make that stark claim, as the philosophers who advocated dualism were God-fearing men. Dualism leaves open the possibility of a Supreme Being behind the curtain; a notion that matterism religiously denies.

The lynchpin mechanism that dualism needs – an interface that connects mind with body – falters for lack of evidence. Matterism has an even worse problem in that regard: it cannot explain how an organism without a brain can intelligently respond to its environment or make decisions, something which plants and even microbes do.

The bottom line is that you cannot explain Nature by arguing that all of its activities are accounted for by the shuffling of atoms.

From the section on The Mind & Consciousness:

As it provides the basis for awareness, your consciousness is the bedrock of your existence. Even within your body, you are not the only thing that needs consciousness, or a mind.

The mind’s most basic task is perceiving its environment and deciding what to do, whereupon it directs the physicality to which it is attached into action.

The human body is made up of tens of trillions of cells. All of them have specific assignments, which they perform as part of a community, such as in a tissue.

To operate, every cell is endowed with consciousness, and a mind that manages the situation. The doling out of awareness and minds does not stop there. Even proteins have jobs to do.

From the section on Meditation:

The state of enlightenment is one of inner silence: being in the moment without the prattle of nattermind as an incessant distraction. In enlightenment, you live in meditation.

Every skill is acquired by practice. Instructing and disciplining the mind are no different. Meditating daily fertilizes the soil of the soul, allowing enlightenment to blossom.

From the section on Minding The Mind:

The reason that people live in ignorance is that they believe what their minds tell them: esteeming emotions and beliefs. The Collective think that they are mortal creatures who face a termination in death. All this is nothing more than the product of lies which the mind has fed them. If materiality is an illusion, so too is life and death.

You must best the raging beast between your ears: your mind. The difficulty of this domestication cannot be understated, as the mind is determined not to keep its flap shut. Your mind has long grown used to being the ruler of your life. Your taking charge is a coup d’etat to which the mind will not sit still.

From the Synopsis on Practice:

You cannot alter your past, but you can better your future. That possibility begins now. You must discipline yourself to live transcendentally.

The world is a mirage made by your mind. Your life is nothing more than a parade of abstractions. To believe in symbols as something critical to your well-being is nonsense. Give it up.

While in the world, be not of this world. Elevate yourself.