“What we call reality in actuality is our perception of it.” ~ American singer-songwriter Jewel Kilcher

Your relationship with Nature begins with sensing its presence. Sensation is the process of receiving bodily stimuli from sensory organs for collation and interpretation via perception. Sensations are stimuli which the mind tries to make sense of.

Perception symbolically comprehends sensations using memory. Perception is a 3-stage process: 1) turn a sensed stimulus into a symbolic representation of pattern and contrast, 2) identify the representation using memory and categorization, and then 3) derive the meaning of the signified symbol.

“Perception is not providing us with a true representation of the world.” ~ English psychologist Christoph Teufel

“Our imagination changes how we perceive the world.” ~ American psychologist Christopher Berger 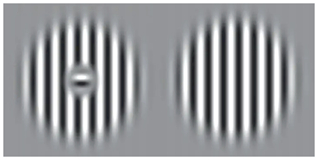 Participants were asked to choose which circle seemed most likely to have continuous stripes. Surprisingly, the patched circle, where the mind had to fill in the missing piece, was preferred most of the time.

Similarly, if people listen to a well-known song without the vocals, they usually hear lyrics that are not there.

“The mind trusts its own generated information more than what it senses outside in the world.” ~ German psychologist Benedikt Ehinger

Most of what the mind senses of the world is meaningless. These inputs are instantly forgotten. Only those sensations which the mind decides are significant are brought to your attention.

Meaning has 2 facets: affinity or repudiation. The mind is either likes what it perceives and wants to revel in it or is repulsed by the object of perception and wants to dismiss it or avoid it. In either instance the mind decides to act, and the perception is brought to conscious awareness.

Every organic molecule which is aware of its environment has a consciousness, as well as a physical substrate (body) and an ethereal mind. The many minds of a cell-based life form communicate to create a holistic mentation which the organism considers a singular mind. The minds in all the cells of your body contribute their perceptions which you construe as a unified sense of self.

How is that you feel sick when only a tiny percentage of your cells are out of whack? These ailing cells communicate their condition and your mind takes the bad news under advisement.

Healing is a complex systematic effort, as is everything within an organism’s hofragy; it’s just that the melodramatic episodes are more striking. The orchestration of healing is a mentation with aligned physical phase transitions, as is all bodily activity.

Intelligence is the ability to appropriately behave: to sense the ambient environment, to perceive, and to make decisions about what to do next. Every living hofragy is endowed with intelligence. For instance, enzymes selectively energize and coordinate the activities of other proteins. Just like their sister proteins, enzymes must know what they are about to be effective.

Your mind is constantly working: sensing, perceiving, and deciding. You may focus your attention upon something and have your mind do your bidding, but the nominal mode of your animal existence is largely autonomic via subconscious processing. By the time you willfully engage, your mind has already laid the groundwork, and you’re just on your mind’s glide path.

There are 2 distinct aspects of mentation: volitional (willmind) and autonomous (nattermind). You may like to think that you are in control of your mind, but those unwanted naggings from your mind inform you otherwise. Your willmind only occasionally intrudes on a ceaseless nattermind.

The price of blithely letting your mind run your life is suffering. To enlighten yourself is liberate yourself from your mind – to end the suffering and live in contentment; a sagacious revolution of the mind that is most profound. 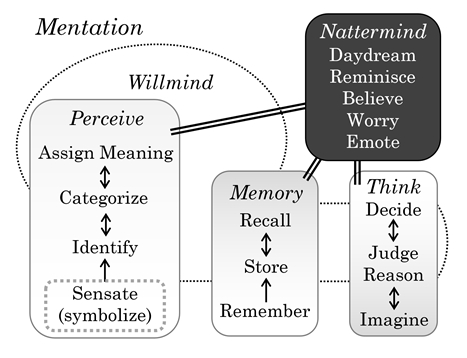 Your mind insists that what you are experiencing is genuine. The river of deception is necessary to create the illusion of authenticity that occasions a palpable excitement of adventure. This sense of authenticity leads to belief, which mentally solidifies the falsity.

Discarding all beliefs opens you up to an abiding sense of wonder at the world within and around you. Nature is an astonishingly imaginative creation of coherence which you can only fully appreciate when you free yourself from the cage built by your mind, with beliefs as the bars of the cage.

The idea of an ‘objective’ world is bogus. The world is entirely within your mind. The mirages the mind sells you as actuality certainly seem real; but then, so does a dream when you are having one.

Your mind has told you many things that were not true or did not come true. That bothers the mind not a whit; just part of its job.

For itself, the mind seeks a sense of comfortable comprehension. If it feels insecure, the mind goes into a tizzy: constructing a nest out of little convictions until satisfied everything is going to be okay, or at least tolerable. You’ve had that happen to you many times.

Emotion is the mind’s most potent ploy to keep you subjugated. The mind adeptly plays your heartstrings with its orchestra of emotions so that you feel invested. The strongest stratagem is the trump card of jeopardy: making things falsely clear using fear.

All that you experience is a construal: a symbolic interpretation. Your mind creates its own psychospace, providing a psychological closeness or distance to your construals.

“Psychospace is the subjective experience that something is close or far away from the self, here, and now. Mental construal processes traverse psychospace and switch between proximal and distal perspective.” ~ Israeli psychologists Nira Liberman & Yaacov Trope

You feel close to loved ones, even though they may be some physical distance away. Conversely, your mind puts disliked things at a mental remove, regardless of their proximity. Things seem closer or farther depending upon your level of emotional involvement with them, physical distance aside.

You tend to think concretely about things perceived as close, but increasingly abstractly about things at a psychological distance. In this context, abstract means high-level: conceptually, not specifically, whereas concrete means detailed (low-level).

Emotional intensity is an aspect of psychospace. Frustration is a very concrete experience which you can reduce by psychologically distancing yourself from the situation. More generally, increasing psychological distance by a high-level construal dampens the impact of negative emotions, and makes challenging tasks seem easier.

Part of childhood mental development is gaining skill in psychospace. To an infant, everything is concrete. A young child learns to attain a higher-level construal. Maturing to achieve a proper perspective involves better psychospace management.