You can now begin to see how energyism fits together to explain Nature as an emergent exhibition. The bustle of Nature as you perceive it comprises phenomena. Existence, which is eternal, emanates from a noumenon: non-phenomenal nothingness. Noumenon begets phenomena because Ĉonsciousness desires entertainment. In this, Ĉonsciousness is no different than your consciousness: enjoyment please!

The mind behind showtivity – coherence – creates and maintains Nature, which your mind aims to understand, constructing its own internal world.

The mind also has another job: keeping you in the dark about what is going on behind the scenes. Thus, the mind has a dual, contradictory role: suss actuality, obscure reality. By keeping life ignorant as its baseline experience, thereby enlivening drama, entertainment potential for Ĉonsciousness is maximized.

Now to comprehend conceptually how coherence produces life forms. To do so, we are going to combine 3 known concepts – holograms, fractals, and gyres – into a new construct: hofragys. We are also going to borrow from mathematics the term tensor, to illustrate entanglement. From these paradigms you will understand the underlying universality of all life.

(That hofragys are a novel construct illustrates how conventional biology has failed to grasp the basic architecture of life. The introduction of egenes in this book is another example.)

A hofragy (hō-fraj-eye) is a holographic-fractal-gyre. Each hofragy is unique, but like others of its kind in having the same essential components. All hofragys interact with their environment: taking in data and themselves emanating information – a gyral process.

A fractal is an image or object composed of smaller, self-similar shapes. Unlike a hologram, which is informationally identical at any scale, the shapes in a fractal at different scales are merely kindred: similar, but each unique. Fractals are abundantly found in Nature. The Romanesco broccoli is fractal. 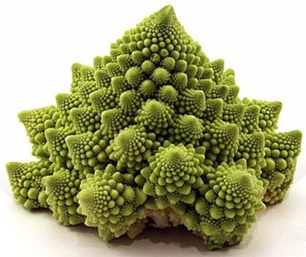 A holofractal is an entity similar to others of its kind, with the same essentials, yet individually unique.

A living holofractal consciously interacts with its environment, and so behaves as a gyre: taking in and releasing matter, energy, and data. An organic holofractal doing its thing is a hofragy. A hofragy is like a hologram in having the same essentials; like a hologram or fractal in being scale-invariant; like a fractal in that each hofragy is uniquely individual while sharing similarities; and is a gyre in interacting with its environment (intake and output).

A tensor is a geometric object which is characterized by its relations with other tensors. The terms gyre and tensor are synonymous in expressing the same principle: interactivity.

By intrinsically being entwined, tensors are a tautology of entanglement. A set of tensors is a tensor network, or tennet. In being a conglomerate of constituent hofragys, a cell or organism is a tennet hofragy: what is commonly called a being. An ecosystem is also a tennet, in being characterized by the sum of the environmental interactions within the system.

Each living organism is entangled with its environment, interacting to survive, and, at its apex, enjoy. If the universe is not just a mechanistic machine, life must have some motivation. You are familiar with your own fluctuations in your will to live – when your enthusiasm to keep going flags. You have also had peak experiences, where it just feels grand to be alive.

Every integral life form – anything that needs to behave – is a hofragy. Each organism, cell, and protein contain a consciousness, mind, and body: akin yet unique. The simplest cellular organism – such as a bacterium – comprises a million or more constituent hofragys, all coherently orchestrated to behave as a unit. Nothing about life, nor Nature, is simple.

“Nature is not embarrassed by difficulties of analysis.” ~ French engineer and physicist Augustin Fresnel

How coherence reconciles the interactive mesh of hofragys, whether in a being or in a universe, is beyond ken. Our minds are strongly object-oriented. We commonly have trouble with cause and effect, which is the simplest process. The idea of comprehending a complex system of interlaced nonlinear dynamics is unimaginable. Yet that is what Nature is, in manifold ways at every phenomenal scale. And that is how Nature is the maximal entertainment platform: endlessly enigmatic to the minds that contemplate it, yet still satisfying in presenting splendor.

A being as a hofragy-tennet illustrates the unfathomable intricacy of coherence in constructing existence. Your mind is limited in appreciating the baroque beauty of Nature, but you can revel in the glorious outlines.

You read about genes in science news all the time. It’s fake news. Genes don’t exist. A gene is just an idea about what the atomic representation of a biological trait may be – matterism at the molecular level. The concept of genes predated the discovery of DNA by millennia: the ancient Greeks, Indians, and Arabs all expressed the idea of genes.

In the early 1950s, geneticists decided that DNA sequences provide the blueprints for fabricating organisms. The basic paradigm is that discrete segments of DNA instruct how to make proteins and other complex biological molecules (macromolecules). From the late 20th century, geneticists increasingly appreciated that non-DNA molecules played determinative roles in trait inheritance. As discoveries in epigenetics (epi meaning outside) burgeoned, the once-simple concept of DNA genes has succumbed to byzantine complexity.

As far as geneticists can tell, all that their so-called genes can do is provide cells with formulas for making macromolecules such as proteins. Matterists have no decent explanation for how an embryo could possibly develop into a complex organism via genetics. Such a daedal process necessarily involves implementing a plan. Geneticists have no idea how such an elaborate plan could be stored in DNA.

But they do have a word for it. Genes which regulate anatomical development are homeotic, from the ancient Greek for “make like.” Both gene and homeotic are just labels for ideas which do not appear in Nature.

While biologists are knowledgeable about observable organism development, the coherency of the mechanics behind it is beyond comprehension. They don’t even know where to start in trying to account for the wellspring of the tangled sophistication apparent in the biology of organisms, even single-celled life. Nonetheless, matterist biologists will tell you that it comes down to chemical reactions, and that no guiding, energetic force is involved.

Many animals – especially those that are on their own from their moment of birth – face a dangerous world the instant they come into it. These creatures have to know the essentials of how to survive without being taught. This precocious knowledge is commonly called instinct. Even though humans have extended childhoods and learn much from parents and other adults, we too have instincts and inborn knowledge – otherwise we would not even know how to make sense of the world. Whatever we learn is on top of the fundamental faculty of knowing how to learn.

The challenge of life as a plant is especially daunting, as a sessile seed must forge its future life from wherever it lands. Roots must decide where to burrow. Whereas an animal just has to find enough to eat, a plant must constantly manage its entire body. A plant must allocate its limited resources between roots, stems, and leaves. Failing to prudently do so spells death, or at least debilitating dieback. A mind is behind vegetative activity as surely as it is for ambling animals.

It is impossible to imagine that physical molecules hold secrets which they may whisper to the mind, or even guide the growth of manifold multicellular life. Contrastingly, it is readily conceivable that energetic genes – egenes – could convey the information needed for development of hofragys, including instincts and the mental maturation patterns that children consistently show.

Localized energy fields are necessarily data repositories, as their patterns sustain coherently. The necessity of egenes to explain organic development illustrates how matterist science can only provide, at best, a fragmentary, incomplete, exposition of Nature.

“The energy of the mind is the essence of life.” ~ Greek philosopher Aristotle

The idea of there being a spark of life – vitalism – is prehistoric. Scholars in ancient civilizations everywhere wrote of vital spirits as the essence of life.

Vitalism lost its vitality from the mid-17th century: crushed by the movement toward mechanistic matterism that defined the Scientific Revolution. Abandoned by matterists, the vital spark of life was supplanted by a religious conviction in reductionist chemistry.

Contrary to matterist dogma, life cannot be accounted for by considering its animation merely a peculiar molecular combination. With energyism, vitalism is revived: the obviousness of there being verve to life restored to recognition.