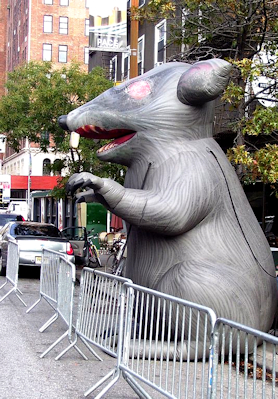 Rats are naturally furtive creatures. But rats on California city streets are an increasingly common sight.

The California rat boom owes to several factors. With a brief respite from California’s long drought, more fruit fell from trees or was tossed into the compost piles that rats love. Longer warm seasons has lengthened breeding season. Renewed lack of water has forced rats more out in the open.

California housing policies have helped. Restricting homebuilding has driven up rents. Homelessness is soaring as a result. Whereas California is home to 12% of Americans, it has half of the country’s homeless population. The extra heaping of outdoor defecation by homeless people makes for tasty rodent poo-poo platters. Homeless encampments offer additional food and housing for rats.

To celebrate the rat boom, California may ban the most effective rodent poisons. California already restricts the use of single-dose rodenticide to professional rat killers.

From microbes to cockroaches to rats, animals evolve tolerance to toxins. The coherent force behind Nature strongly favors life. What doesn’t kill you makes you stronger. California rats have increasingly been able to consume slow-acting poisoned food or learned not to touch the stuff.

The problem with rat poison is that it kills more than rats. Birds of prey, raccoons, foxes, coyotes, and mountain lions have been brought down by eating toxic rats.

Poisoning rats has had such a strong knock-on ecosystem effect that California’s liberal politicians are taking a larger view of the rat problem. Meanwhile, conservatives, who could give a rat’s ass about preserving the environment if it means an inconvenience to people, think banning agents of mass destruction is crazy.

Joe Mcgauley, “These are the cities with the worst rat problems in the country,” Thrillist (15 October 2019).

“A bill would make it harder to control California’s thriving rats,” The Economist (23 November 2019).

The Editorial Board, “California goes to the rats,” The Wall Street Journal (7 August 2019).