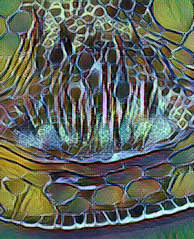 Cellulose is the most abundant organic compound on Earth, having gained that distinction from being the substance by which plants propel themselves skyward.

Cellulose is a polysaccharide – a sophisticated linearized sugar – engineered for structural stability. Cellulose is water insoluble and resists most other organic solvents.

Plants produce cellulose at their cell membranes. Teams of proteins work together to spin cellulose fibers as they travel along the cell membrane which is being fortified.

The tracks these cellulose fabrication teams follow emanate from a dual guidance system. The basic line is laid down as a plant organ – a leaf or stem – develops. This line is comprised of microtubules: nanometer-width fibers which provide the basic beams for organ development.

The dual guidance system allows “a rapid and flexible mechanism for controlling cellulose alignments that is less constrained by prior wall architecture,” says molecular plant biologist Enrico Coen. Thus, plants can precisely specify cellulose fortification where needed, providing for contingency in case of damage or a change in growth plan.