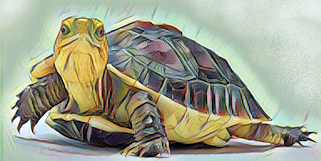 Turtles abruptly evolved from lizards during the Triassic period, over 220 million years ago. Turning ribs inside-out to form a protective shell was a saltational (quick & radical) evolutionary innovation.

China had 34 turtle species, including 3 tortoises, 5 sea turtles, and 26 freshwater turtles. A survey found that wild populations of turtles in China declined by over 90% between 1980 and 2012; doubtlessly with much further decrease since.

The catastrophic decline of wild turtles has come from overexploitation. As turtles symbolize good fortune and longevity in Chinese culture, the turtles themselves have had legendary bad luck and are unlikely to survive.

The Chinese rapidly developed a domestic turtle farming industry in the past 3 decades to meet the huge consumption demand. Farmers buy wild-caught turtles to improve the reproductivity of farmed stocks. Some rare species, such as box turtles (pictured), are quite pricey – engendering poaching and accelerating the prospect of extinction.

Further, the Chinese taste for turtles has introduced invasive species which threaten the survival of native turtles. For instance, the red-eared slider, a notoriously successive invader, is farmed in China and has been increasingly found in the wild.

Though wildlife are protected by statute, China’s government has typically turned a blind eye to enforcement. The covid-19 global pandemic started with the illicit wildlife trade.