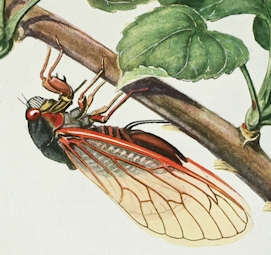 Cicadas are large flying insects that live in temperate and tropical climates. There are about 3,000 species, living on all continents except Antarctica.

The cicada lifestyle is predominantly subterranean. They live as nymphs for most of their lives, sucking root juice. Their strong front legs are built for digging.

In their fifth and final nymphal stage, cicadas tunnel to surface, making their way to a nearby plant, where they molt and emerge as adults.

The adults mate for few weeks to few months. Males form large choruses so as to loudly sing to receptive females. Cicadas have species-specific songs. Some sing at up to 120 decibels; about as much racket as any insect can muster.

Once mated, females cut slits into tree barks to deposit their eggs. Newly hatched nymphs drop to the ground, burrowing to find roots.

Cicadas are individually defenseless, making them an easy meal for birds, cicada killer wasps, praying mantis, and sometimes squirrels. In Australia, bass are keen to dine on cicadas that crash-land on the water.

The en masse cicada defense mechanism is predator satiation: being so concentrated in an area – up to 350 individuals per meter – that some survive despite predation.

Most cicadas have a life cycle of two to five years. One North American genus – Magicicada – has a number of distinct broods that go through 13 or 17 year life cycles, depending upon region. Southern Magicicada emerge every 13 years. Their northern cousins have a 17-year cycle. These are the longest insect life cycles.

Magicicada present mysteries.  Why life cycles that are so long, and that are prime numbers? How do the larvae know when to emerge? The answers, for now, remain conjectural.

What is known that bird populations hit a cyclical low when periodical cicadas emerge. The gyre that triggers long-term cyclical changes in the forest at 13- or 17-year intervals to favor cicadas is not known.

The deluge of dead cicadas that litter the forest floor after mating temporarily boost tree growth. At 10% nitrogen, cicada bodies are natural fertilizer. Early stage nymphs don’t tax trees sucking roots as much as when they get older. Still, those seem insufficient to explain a favorable forest cycle well over a decade long.

The prime number facet of the cicada cycle is also an enigma. It too supposedly jiggers the probability of predator synchronization to the cicadas’ favor.

Nymphs must somehow know when they should emerge. It may be that the trees upon which they feed signal the cycle, perhaps coupled with come cicada counting.

Some cicadas occasionally emerge four years off-schedule. These stragglers are easy prey that do not usually survive. But in the off chance that they did, it would be a way of instant speciation.

Ishi Nobu, Spokes of the Wheel, Book 3: The Elements of Evolution (pre-publication).