The daunting difficulty of climate modeling is compounded by their institutionalized production, thereby putting a conservative cast on uncertainty which increasingly looks recklessly optimistic.

A climate model is a system of equations aimed at formulaically bottling Earth’s intricate geodynamics and chemistry. Climate models are typically coded in a primitive, difficult-to-maintain software language, and sprawling over a million lines of code (the equivalent of 18,000 pages of text). These models are an institutionalized effort, and so are subject to groupthink.

There are almost 20 major climate modeling centers around the world. Most are in North America and Europe, and are collaborative efforts among multiple scientific institutions.

The basic inputs into climate models are the external factors which vary the amount of thermal energy absorbed by Earth, including atmosphere, land, and oceans. These external factors are termed “forcings.” Forcings include gases and aerosols (tiny particles).

Current models are more detailed than those decades ago, as the figure depicts. 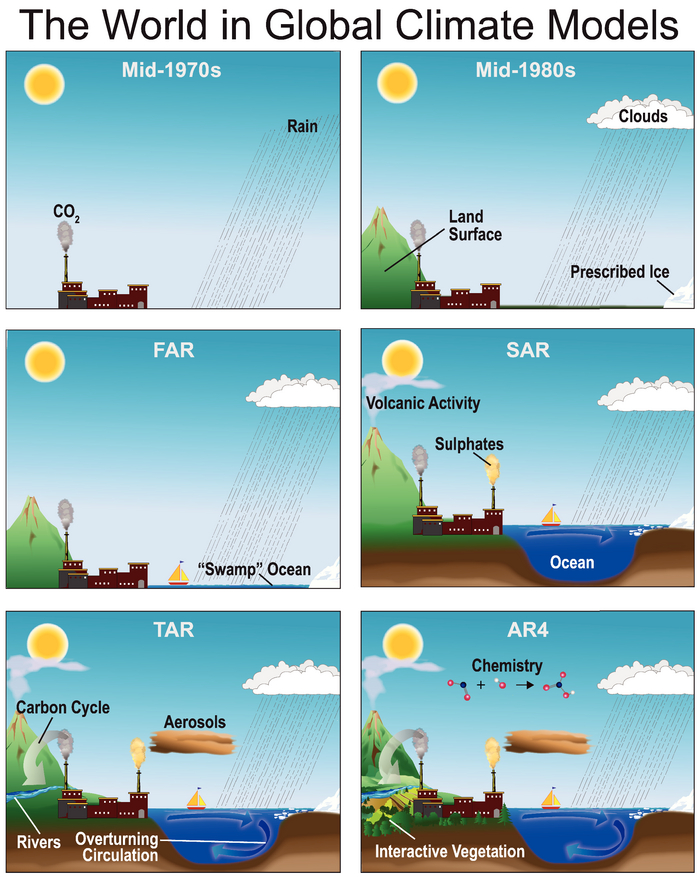 Early climate models took a simple flat-Earth approach. Later models have depicted a global surface cut into little cubes which became smaller as more computing power became available. Though of seemingly finer resolution, what the models still struggle with are the gyres which are region-specific but with knock-on effects on a larger scale. For instance, warming is changing the flows of atmospheric rivers and marine currents in congruent and not altogether predictable ways.

“Clouds are a constant thorn in the side of climate scientists. They cover ~2/3rds of the Earth at any one time, yet individual clouds can form and disappear within minutes; they can both warm and cool the planet, depending on the type of cloud and the time of day; and scientists have no records of what clouds were like in the distant past, making it harder to ascertain if and how they have changed,” says climate scientists Robert McSweeney & Zeke Hausfather.

The most vexing aspect of modeling clouds is convection: the process where warm air rises from Earth’s surface, cooling and condensing into clouds in the upper troposphere.

The convection which forms clouds is an atomistic portrait of the problem in modeling atmospheric currents. The big kahuna of the convection conundrum is the Intertropical Convergence Zone (ITCZ), where atmospheric flows meet near the equator. During the spring, the ITCZ splits into 2, which “current climate models exaggerate,” reports climate modelers Tobias Bischoff & Tapio Schneider.

“Most global climate models show some degree of the double ITCZ issue, which causes them to simulate too much rainfall over much of the southern hemisphere tropics and sometimes insufficient rainfall over the equatorial Pacific,” admit McSweeny & Hausfather. The double ITCZ “is perhaps the most significant and most persistent bias in current climate models,” laments Chinese climate scientist Baoqiang Xiang.

Correctly predicting a changing ITCZ is crucial, as there are knock-on effects. “For example, most of current climate models predict a weakened trade wind along with the slowdown of the Walker circulation. The double ITCZ problem may lead to an underestimation of this weakened trade wind,” said Xiang. The trade winds are the mid-latitude atmospheric flows which significantly impact weather patterns.

As the double ITCZ affects cloud and water vapor feedbacks, it plays a key role in the how models construe “climate sensitivity.” Many climate models estimate climate sensitivity: how Earth’s thermodynamics are likely to react to changes in greenhouse gases.

Jet streams are another flow which causes conniptions in climate models. Jet streams are the meandering rivers of the sky, funneling weather systems from west to east across the globe.

Jet streams are encoded in climate models, but simplistically: too strong and straight. “In the real world, the jet veers north a little as it crosses the Atlantic (and a bit the Pacific). Because models underestimate this, the jet is often too far equatorward on average,” observed English climate scientist Tim Woollings. The upshot is that climate models underestimate the strength of storms.

Under-scoping storms is emblematic of the problem climate models have with dramatic events. In a longer and larger frame, current climate models cannot account at all for a brief abrupt cooling toward the end of Earth’s last glacial episode, 33–11.7 thousand years ago.

Climate models conform with conventional physics and physiochemistry assumptions, some of which, such as the conservation of energy, remain orthodox despite having been disproven or are simplifications which may be violated. Further, as Robert McSweeney notes, the partial differential equations that comprise climate models are “so complex that there is no known exact solution to them.”

Adding to the inherent uncertainty are factors not in climate models which have serious portent, including feedback impacts and gyres which are little understood or unpredictable in extent, such as volcanism.

Most previous mass extinction events have involved volcanism. This one will too. Warmed waters penetrate the mantle and incite volcanic plumes and eruptions. This nascent trend has already started and will exacerbate climate change. Studies have shown that volcanism lends to a prevailing climate trend: cooling or warming depending upon glaciation or hothouse conditions, respectively. Volcanoes do not feature in current climate models; an unpredictable but inevitable contributing factor left unstated.

Sophisticated models do sometimes project what climatologist Gavin Schmidt called “emergent properties”: confluence effects which are not specifically coded into the model. These emergent properties do not always enhance accuracy.

“Bias correction – sometimes called ‘calibration’ – is the process of accounting for biases in the climate model simulations to provide projections which are more consistent with the available observations,” said English climate scientist Ed Hawkins. “For instance, most global climate models simulate too cold a North Atlantic, a problem that has knock-on effects, for example, on the atmospheric circulation and rainfall patterns in Europe,” noted German climatologist Douglas Maraun.

To date, the forecasts of individual models have ranged widely around what actually happened. Aggregating the results of different models statistically improves their accuracy. This consolidation rather precisely parallels that estimation of how many beans are in a jar improves the more guesses there are.

The figure below illustrates climate model predictions using the last 3 decades of the 20th century as a baseline period. 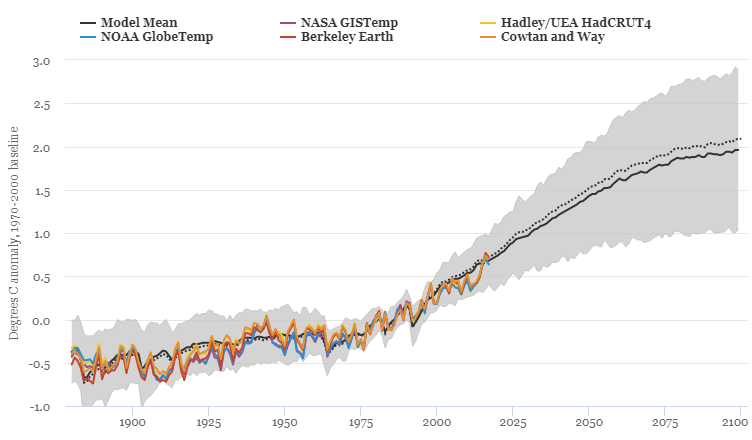 Global warming is quite uneven. Already, with Earth’s global surface air temperature averaging 0.8 ◦C above 1880, it has been 3 ◦C warmer in parts of the Arctic. Climate models have consistently underestimated the rapid pace of polar warming and ice loss.

The warming experienced now is the result of greenhouse gas pollution decades ago. Because the oceans absorb so much thermal energy, a mid-point estimate of the lag between emissions and atmospheric warming is 40 years.

Already, in evaluating the current state of emitted pollution, the UN declares that “the summary findings are bleak. Countries collectively failed to stop the growth in global greenhouse gas emissions. There is no sign of emissions peaking in the next few years.”

Uncertainty reverberates through time. The lowest forecasts for the end of the century are unrealistic in assuming a lid on future human pollution for which there is no indication. These forecasts state that the atmosphere will only warm at worst by 3 ◦C by 2100, which nonetheless spells Hell for hot spots on Earth, including the Middle East and Australia.

Recent climate forecasts are distinctly warmer: projecting 5 ◦C by the end of the century – and this is global average. These numbers suggest an infernal Earth by the end of the century, at a rapidity of change which will only accelerate the mass extinction otherwise occurring from human predation and toxic pollution. “The scary part is these models might be right. That would be pretty devastating,” exclaimed climate modeler Andrew Gettelman.

John Fyfe typifies climate scientists when he says that “it’s a bit too early to get wound up.” Even when the evidence indicates otherwise, scientists hang onto hope. In doing so, their conservatism performs a disservice by failing to make a needed clarion call about the real and present danger to our survival which will only grow – likely as quickly as pessimists envision.