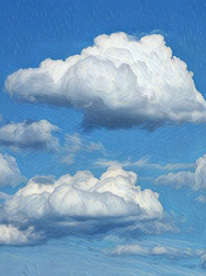 Climate modelers continue to refine their assumptions about the sensitivity of global warming to greenhouse gases. Cloud cover is the latest refinement.

The rapidity and severity of climate change depends upon the degree Earth warms in response to increases in greenhouse gases; a concept climatologists refer to as “climate sensitivity.”

Water vapor has the greatest greenhouse effect. Clouds hoard warmth in the tropics. Contrastingly, less cloud cover in the extratropics (outside the tropics) warms by increasing incident sunlight.

That warming would aridify the air has long been thought. Climate modelers are increasingly appreciating this prognostication.

The latest generation of climate models revised their estimates of feedback effects from greenhouse gases: heightening the warming effect due to less water vapor in clouds and fewer clouds in higher latitudes. “This raises the possibility that climate sensitivity is indeed high in the real world,” realized Zelinka et al.

There has been a decided trend in the past decade that models underestimated climate sensitivity. The cloud of doubt has yet to clear that the hotting up won’t be even worse than expected.