How your mind makes connections and whether you believe conclusions from those connections determines your view of the world.

Philosophizing is the craft of 1) defining concepts and 2) interrelating defined concepts into a system. A defined system is a philosophy. The mind is a constant philosopher.

A concept is an abstract generalization. Concepts are labeled with words.

Everything perceived is unique: a snapshot at a point of time that is never again exactly the same. Connecting perceptions by some criteria of similarity results in the creation of a generalization. This sketch of abstract nonspecificity is mentally massaged into an idea by deciding where similarities end. A generalization is crafted into a concept by defining boundaries of abstraction.

How is a stool different from a table? Both have a flat, horizontal top. Both have a support structure – legs or a pedestal – to place the top at a usable height.

The labeled distinction between table and stool is how either is typically used. Whereas you sit on a stool, you place objects on a table. Function defines form: more specifically, the definition depends upon how you conceive what it is useful for.

Look at objects around you. Compare them to similar objects. You’ll discover that a lot of words for objects are defined by how they can be used, not just how they appear.

Most swans are white. A very few are black. The idiom “black swan event” refers to an outlier occurrence which results in significant consequences.

Concepts are generalizations. As everything, and every event, is unique, conceptualization itself risks a black swan event.

You generalize about objects in the physical world. That works well. You can get around; use tools and appliances; talk with other folks and discover that the world seems objective, in that how they view the world corresponds pretty well with what you experience.

What if all of what appears to be real is instead fake? That would be a black swan event the size of your whole world.

Misunderstanding often arises from having divergent implicit definitions for the words being used. Defining terms is critical to sharing philosophies.

On to connections: the critical links which fit the bits of observation into a comprehensible collage.

Every assignment between concepts in a philosophy is correlative: concepts somehow relate to each other. Ideas may be apples-and-oranges but still seem fruitful.

Correlative connections can be interesting, but the rubber meets the road with causality. We see connections through time. Some of these correlations we take to be causal. Our lives are a constant study in cause and effect.

The attribution of causality is trickier than most suppose. One of the most common mistakes by scientists is wrongly attributing causality from correlation.

The critical point to make about causality is that it is always a calculated conclusion. Cause-and-effect is merely a mental concoction. Causality does not appear in Nature, only in your mind. Something seeming obvious does not grant it validity.

You proceed through life by intention. Living is the process of swimming in a continual stream of desires.

All intentions depend upon causality: if you do this, that will happen.

An accident occurs when intended cause and effect fails. Frustration lurks behind every intended action as accident potential.

What causes accidents? Sometimes the problem is a mistaken conceptualization of causality. More often, accidents are caused by inattentiveness – a failure of awareness, a missed detail in the moment.

What exactly is causality? Causality is an understanding that something physical somehow transforms or otherwise is altered by an energetic force.

Looking closely at what physical and energy are reveals the nature of connections made by perception.

The term physical descends from medieval Latin for “natural,” or “of Nature.” The word physics is the science of Nature.

All that we ever sense is physical. The supposed material which makes something physical is called matter. What makes matter move is termed energy.

Since what appears in the mind is a physical world propelled by energy, it is a logical connection that understanding what matter and energy are explains the nature of existence.

Whereas matter is perceptually obvious, energy seems somewhat slippery. Looking at what energy is confirms this impression.

The word energy dates to ancient Greek. Aristotle used energia for activity. Aristotle’s conception of energy was reconceived in medieval times as “force of expression”: the power to mentally conjure realistic images. This is actually the most apt definition, as we shall soon see.

The broader meaning of energy used today – of power – caught on in the mid-17th century, when it started appearing in English texts. Energy is a synonym for what physicists also called “work,” from the ancient Greek word ergon. The classical physics definition of energy is: what it takes to put matter to work (set matter in motion).

In investigation of atoms and their components, modern physicists discovered that matter is made of energy, as well being the force behind moving matter. Atomic bombs explosively made the point that matter comprises impressive energy. That energy can make matter has been proven experimentally.

The idea of energy is just that: an idea. 21st-century American physicist Carlos Calle explains: “Energy is an abstract concept introduced by physicists to better understand how Nature operates. Since it is an abstract idea, we cannot form a concrete picture of it in our minds. We find it very difficult to define energy in simple terms.”

Understanding what energy truly is completely upends what you have been believed to be a physical world. You made the wrong connection.

The physical world is a mirage of the mind. Your mind has done nothing but lie to you – about everything – for as long as you can remember. Physics has proven this.

Newton’s equations looked like the right connections. Physicists still use them. Things do appear to work that way.

Matter, space, and time are entangled. Matter creates gravity, which warps spacetime. The geometry of spacetime depends upon the matter within it.

Space and time are not absolute. Spacetime is relative to the matter within it.

Just as Newton’s mathematical physics worked in the ambient domain, Einstein’s relativity equations were confirmed by examining the heavens.

The irreconcilable distinction between absolute or relative spacetime was a matter of perspective: examining the everyday world or cosmological dynamics.

Einstein’s relativity theories stated that the geometry of Nature depends upon its observation. Existence is relative to its perception.

Each mind views Nature through its own reference frame. “Physical concepts are free creations of the human mind, and are not, however it may seem, uniquely determined by the external world,” Einstein wrote.

All you can ever know of “the world” is what your senses detect. These sensations are transformed into perceptions which overlay interpretations of meaning. What appears as physical is a mental fabrication of memory and imagination.

That you are conscious of a streaming mental production is all that you can be certain of. All you ever really know of Nature is through your own awareness. 10th-century Indian scholar Abhinavagupta wrote, “Nothing perceived is independent of perception and perception differs not from the perceiver. Therefore, the universe is nothing but the perceiver.”

That the world is entirely in the mind is known as solipsism. Solipsism cannot be disproven. Instead, through our social interactions, we come to believe that the world is “objective.” Modern science is based upon this falsity.

Contrary to solipsism, the idea of objective reality can never be proven. You can only experience what your mind informs. As 20th-century India guru Nisargadatta Maharaj said, “The world you can perceive is a very small world indeed. And it is entirely private. Take it to be a dream and be done with it.” What does this mean?

Showtivity corresponds with proven relativity theories, as well as what those spiritually realized have consistently taught since antiquity. Ancient Indian guru Vasistha, who lived 3,000 years ago, wrote that, “It is the nature of appearance to appear to be real, even though it is unreal.”

All assumptions about physicality being real are false. This reflects what energy is known to be.

Modern scientists view artifacts as demonstrative of matter-to-matter causality. They simple-mindedly think that matter can cause matter to produce some result. They blithely ignore energy because there is nothing substantive that they can say about it. 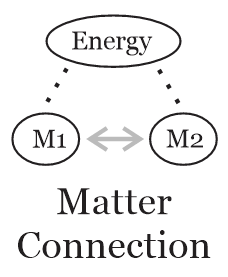 This paradigm – of treating physicality as if it were reality – is called matterism. Matterism can’t possibly be correct. All so-called ‘scientific’ theories which assume that matter is real are just sophistic myths.

For anything to happen requires energy. Knowing that matter is ultimately energy, and energy is just a mental figment, falsifies matterism.

From a personal perspective, energyism embraces silencing the noise that the mind produces. This is the only route to purer perception. This state of clarity is what gurus term enlightenment. The enlightening comes from quieting the mind.

Worries are bullets of the imagination, using memory as the casings. Quietude eliminates worries.

A proper scientific perspective accepts that artifacts are all that appear as evidence, while rejecting that these artifacts are anything but suggestive of energetic events. Knowing that the mind’s fabrications are not to be trusted renders causality a tricky business.

You now understand that things are not what they seem. The mind is an inveterate liar. Belief is foolery. Objectivity is illusory.

Treat physicality and whatever appears in the mind as a convenience, not to be taken conclusively. Living tentatively is the only proper connection.

The Red Pill: Mastering The Matrix.

“The mechanics of existence.”