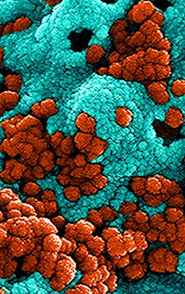 The human body is a rich ecosystem, with a vast collective of microbial life. Our bodies are a cosmopolitan cellular world.

Microbiota are instrumental in defining the quality of its host’s life. The microbiome is personalized, localized, and specialized.

Even before birth, one’s microbiome is a determinant of health, and remains so throughout life. Changing diet can alter the ecosystem of gut microbiota within a matter of days.

Commensal microbes offer genes that complement the human genome in many ways, including such basic functions as metabolism. Microbes are critical for enzyme production. Our bodies possess a pathetic complement of enzymes whereas microbes carry an arsenal.

There is an intricate interdependence among the many thousands of microbial colonies within the body. The quality of microbiome bodes for the health of its host. If microbiotic diversity is low, the toolkit for fighting infections is meager.

Resident viruses are instrumental in modulating metabolism and health. When the bacterial gut flora ecosystem is disrupted, such as by antibiotics, resident viral communities step up to protect the host from infection.

V2, the virus which causes covid-19, primarily targets the upper respiratory tract. Indigenous microbes in the mouth and lungs not only adhere to local cells, they comingle with them as well. The purpose and effects are not understood. It may well be an intimate form of communication and sharing.

V2 has proven itself an especially wily coronavirus, most notably in its infectiousness. V2 appears saltational – an evolutionary leap – compared to its predecessor, V1, which causes the disease called SARS.

The major mystery about covid-19 is why individuals respond so differently to V2?

Roughly 80% of those with covid-19 suffer only mild symptoms at worst. Many have no symptoms whatsoever. Most infected may not realize it because their symptoms are so mild; whence the ease with which V2 creates infection clusters.

15% have severe illness from covid-19, mostly because the body badly reacts or overreacts (auto-immune syndrome). Roughly 5% of those infected spend a spell in critical condition. ~0.6% of V2 victims succumb to covid-19.

The 2nd major mystery surrounding V2 is the immune response. Other coronaviruses, including V1, from which V2 descended, leave a lingering presence in signature antibodies; for V2, not so much, and not for long: only a few months.

An antibody is a large, Y-shaped protein that tags a targeted pathogen, whether bacterial or viral. Depending on the pathogen, the tagging may be the kiss of death or just a handy signifier.

For V2, antibodies are mere identifiers, and so their presence is not especially important. The body doesn’t produce cells that don’t contribute to the team effort; hence the relative paucity of V2 antibodies.

“The immune system is so much more complex than just antibodies,” marvels virologist Andrés Finzi. Not only may native immune cells be more skilled in combatting V2 once exposed, irrespective of antibodies, but so too the microbiome.

Bacteria have their own immune systems. And the commensal viruses in the host are doubtlessly skilled fighters, for nothing understands infection better than viruses.

The diversity of symptoms is likely to due to microfloral assist to the host immune system. V2 latches onto a cell-surface protein – ACE2 – common in circulatory system cells in the upper respiratory tract. V2 also likes enterocytes: the absorptive cells which line the inner surface of the small intestines.

The effectiveness of immune system cells is fairly consistent throughout the body. But the robustness of microbiota may vary considerably in different organs, as they comprise distinct communities.

Just as everyday cellular function is a collaborative effort between host cells and microflora, so too battling pathogens. V2 is likely to settle in where it can: the chinks in the armor of immunity; whence the diversity of symptoms, and the degree to which covid-19 wreaks havoc.