For a half century, doomsters have predicted the end of the world. On the opposite pole, climate change deniers increasingly seem psychotic. But optimists still hold sway: that human ingenuity can solve what selfsame ingenuity created. When does a cliffhanger become a tragic fall – or a last-minute miracle salvation?

That a rapid mass extinction event is underway is indisputable. Animal population numbers across phyla have dramatically dropped by roughly 70% in just the past half-century.

Pollution from industrial capitalism has blanketed the world with toxic metals and other chemicals which foul the land, water, and air – killing millions of people annually, sickening and shortening the lives of literally billions.

The growth curves of fossil fuel consumption and plastic production in the past half-century have been positively exponential, and show scant signs of declining this decade. Politicians and captains of industry promise reform beginning a decade hence – only after their tenure has expired. Business-as-usual continues to rule the day.

Fed by fossil fuels, global warming is accelerating. As oceans absorb 95% of thermal energy from greenhouse gases, warming of the atmosphere lags behind oceanic warming by some 4 decades. Even if such gas emissions magically stopped tomorrow, the world would continue hotting up for decades. Climatologists have decried this unavoidable scenario as laying catastrophe on humanity’s doorstep.

Extreme climate events are becoming more frequent and more intense. Climatologists universally forecast this as part of a trend.

“People respond to the hazards they perceive,” observed American risk analyst Paul Slovic. Why does the public still perceive that tomorrow is going to be like yesterday ad infinitum? It is not for lack of prophecies of impending doom, alongside abundant evidence that the picture of the global environment is darkening at a disturbing pace.

American decision analysts David Rode & Paul Fischbeck: “The purpose of forecasting is not solely to inform, but most often to initiate a process of action. The forecaster seeks to warn, to call for a change in behaviour, or to seek mitigation (or amplification) of the consequences. As a result, the value of any forecast is based in part on the decisions it precipitates – a result encoded in the very foundations of decision theory.” Decision theory assumes that people are rational – a lie that is the proverbial ornry fly in the theory’s ointment of insight.

“Apocalyptic forecasts are unique. They can only ever be observed in their failure – that is, the world did not end as predicted,” says Rode. “Observing a string of repeated apocalyptic forecast failures can undermine the public’s trust in the underlying science.”

As the United States was being founded on its democratic ideal, Thomas Jefferson opined: “If we think (the people) are not enlightened enough to exercise their control with a wholesome discretion, the remedy is not to take it from them, but to inform their discretion.”

Beyond schoolyard learning, the main means for mass education has been mass media. The result with regard to the prospect of self-extinction has not been sanguine in providing decent calibration. Rode & Fischbeck note that repeated studies have shown “the media were prone to ‘attention cycles’ that tended to be self-amplifying, and led to the news provoking a ‘rising sense of impending catastrophe’ from climate. This type and frequency of media coverage tends toward sensationalism and an increased (but unjustified) certainty in reporting.”

The problem with apocalypse soon is that it has no historical antecedent that resonates in the mind of the populace. What instead rings true, however falsely, is that we shall overcome all obstacles and survive as a species. 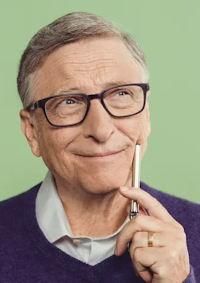 Billionaire Bill Gates has a new book: How to Avoid a Climate Disaster: The Solutions We Have and the Breakthroughs We Need. Gates’ idea of innovation when he was a software robber baron was to copy what others had invented and to steal intellectual property with abandon.

As to his track record as a visionary: in the early 1990s Gates saw no immediate promise in the Internet until his engineering staff at Microsoft rubbed his nose in its obvious potential. Echoing his belated Internet epiphany, Gates confesses that he had no notion of climate change until 2006. “I had assumed there were cyclical variations or other factors that would naturally prevent a true climate disaster.”

In his book, Gates exudes optimism that we can “create and roll out breakthrough technologies” which fend off doom. “I see not just the problem of climate change; I also see an opportunity to solve it.”

Self-extinction is death by a thousand cuts: severe storms, heat waves, floods, droughts, crop failures, wildfires, epidemic diseases. This event diffusion perhaps weakens resolve to treat the problem as systemic. But even a monolithic event has failed to inspire an appropriate response.

An uncontained covid pandemic caused by an unstoppable virus that is rapidly adapting to overcome all resistance has not persuaded people of that fact. Instead, after an initially panicked response, futile restrictions continue to be imposed. These measures only deepen inequitable destitution, generate mountains of trash, soil the future prospects of younger people, and inspire violence – both domestic and by political authorities. One may observe that the Jeffersonian ideal of “informing discretion” does not appear to be happening.

Swedish climate activist Greta Thunberg in January 2020: “I’ve been warned that telling people to panic about the climate crisis is a very dangerous thing to do, but don’t worry – it’s fine – I’ve done this before and I can assure you: it doesn’t lead to anything.”

Two centuries of continuing technological miracles has fostered a mindset that anything can be controlled – it’s only a matter of invention. Happy thought indeed. Let’s all smile on our way out.