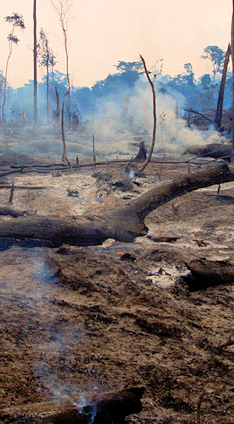 Homo erectus discovering how to control fire would not have happened, and been for naught, had it not been for wood. Historians claim no Wood Age only because no such archaic artifacts remained to show wood’s importance; hence, prehistory begins with the Stone Age.

Prior to the Neolithic, man lacked implements powerful enough to cut and carve wood, let alone fell trees. The development of metal technology and the felling of forests went hand-in-hand.

We never really left the Wood Age, as the value of lumber to humans has been everlasting. Wood products are used for fuel, construction, and as personal implements, both at hand and between the cheeks.

Having acquired sailing technology and a taste for easy wealth, the Vikings took to trading and marauding other lands. The Vikings discovered the rich forests of Iceland in the late 9th century. Settlers slashed and burned to grow hay and barley, and to create grazing land. They used the timber for building, and to fuel their Iron Age forges. Within 3 centuries, the forests were gone. Hardship fell upon the land. To this day, the forests never recovered, even as the most modern agricultural technology has been applied.

In the 16th century, Englishmen lusted after the lush forests of North America, having cut most of their own trees down. Conflicts over timber rights provided part of the drive for American colonists to revolt against their British masters. England wanted the best stands of trees for its navy. Americans wanted the freedom to fell whatever woods they would.

Without its timber resources, America’s revolt would have surely failed. An abundance of iron and charcoal for steel spelled weaponry aplenty, and all of its ships were built locally.

Scarcity of timber forced the English to move to fossil fuels, substituting coal for wood as the principal energy source. This in turn inspired innovations which begat the Industrial Revolution.

Just as timber fueled prosperity, deforestation has repeatedly meant decline. Along with other ancient civilizations, the Roman Empire was weakened as it became dependent upon others for food; having cleared its farmlands of the tree cover that had nourished the soil for ages.

10,000 years ago, nearly half of Earth’s land was covered by forest. Over 1/3rd of those forests have been obliterated.

Like beavers gone rabid, humans now chew through some $1 trillion dollars of wood products each year. People in industrialized countries account for only ~20% of the world’s population but consume 76% of its timber. By 2010, Americans were using twice as much wood as they did in 1950.

Deforestation is typically not accomplished by harvesting timber. Instead, woodlands are burned, with the charred remains cleared as needed. This is a hoary practice. Prehistoric hunter-foragers manipulated vegetation via fire to round up and slaughter game. Nowadays, vast tracts go up in flames as a shortcut to gaining arable land. The dirt is damaged by such wildfire. The loss of soil productivity from such practice is seldom recovered.

Forests are fragmented to carve out farmland, and to build villages, towns, and cities. Roads and dammed rivers fragment forests and woodlands. This fragmentation disrupts the delicate balance of Nature that exists, and can cascade to devastation, especially for forest creatures. “The forest is more vulnerable to change when there has been a disturbance,” stated geographer Tomasz Stepinski.

Recent research has shown the forest patches don’t remain so for long. Stepinski: “If you are cutting forest, you have the infrastructure to finish it. It’s so much easier to cut the rest. People never stop: they convert on a large scale.”

The accelerating decimation of the Amazon rainforest is exemplary. Forest fragmentation has been accelerating throughout the world, especially in the tropics: those regions with relatively rapid economic development.