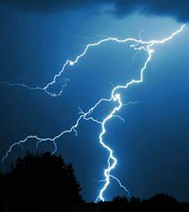 In a planetary circuit, electricity courses throughout Earth’s atmosphere and its surface. By 1749 Benjamin Franklin concluded that the properties of lightning were similar to those found in machines. This is also true of organisms on Earth, right down to their cells.

Solar radiation infuses the atmosphere with electricity. The atmosphere is positively charged whereas Earth’s surface is negative.

Thunderstorms dramatically carry negative charges down to earth, which are then gradually discharged through the air during fair weather. But ions continually flow.

In a flat field on a clear day, the atmospheric potential gradient is ~120 volts per meter. Plant growth – trees and flowers – ramp electric field strength to several kilovolts.

These near-surface electrostatic forces are detected by organisms. Flies and bees are led to flowers by their charges. Spiders balloon through the air via the atmospheric electric circuit. Microbes respond to electrical conditions in ways we have barely begun to understand, including altering their metabolic activity.

“Over evolutionary timescales living organisms adapted to use the electricity in the environment,” hypothesizes Israeli Earth scientist Colin Price. “This has likely not changed over billions of years and is similar to the evolution of our eyes, which evolved using the sunlight Nature gave us.” Vision and photosynthesis occur in the richest bandwidths of solar radiation.

“The frequencies in living organisms are similar to those in the atmosphere caused by lightning,” Price adds. The distinction is one of strength. Life responds to and relies upon fields orders of magnitude weaker than those which crack the sky.