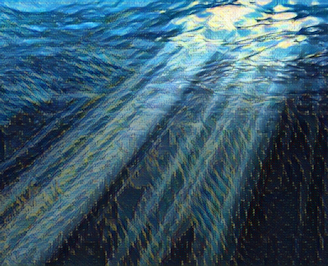 Energy wave fronts make their way forward knowing exactly what they are doing: incorporating all relevant information of their environment as they propagate.

During the 160s, Ptolemy characterized perceived properties of light, including reflection, refraction, and color. Though he construed refraction tables, Ptolemy failed to discover the exact math relating angles of incidence and refraction (Snell’s law).

In 1658 French mathematician Pierre de Fermat proposed an optics principle of least time: that light always travels most efficiently: from one point to another in the least time, regardless of being reflected or refracted. Fermat’s principle (as it is commonly called) was broadened to encompass all wavefront behavior by Dutch physicist Christiaan Huygens in 1678. (Huygens’ principle applies only with 1 time dimension and an odd number of space dimensions. The principle fails with an even number of spatial dimensions.) Augustin Fresnel supplemented Huygens’ principle in 1818 with mathematical treatment of interference (diffraction). 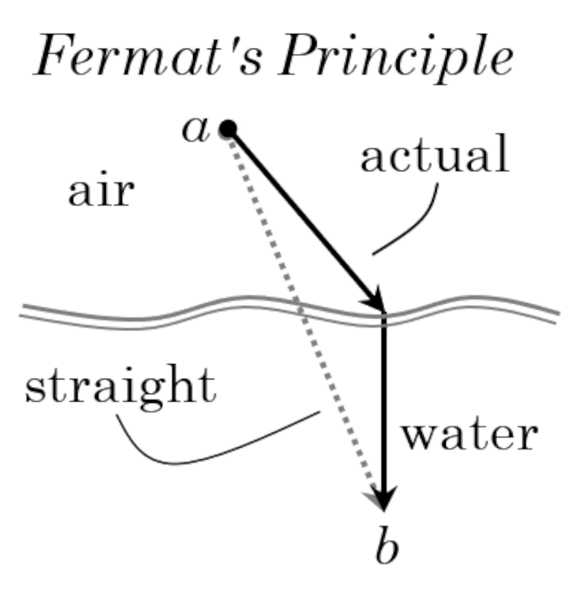 In the figure, a ray of light going from a to b would travel the least distance via the hypothetical straight line. Instead, light actually traverses a longer distance that takes less time, as light moves slower through water than air – the straight-line path would incur longer, sluggish passage in water. Refraction reflects transmission optimality based upon structural information about the instant medium being traveled through.

The law of wave transmission optimality (the Huygens-Fresnel principle) was generalized for all dynamics in any physical system by Irish physicist and mathematician William Hamilton in 1827. This principle of least action is based on a single function: the Lagrangian. Hamilton’s principle was a rehash of the same discovery independently-made by Gottfried Leibniz, Leonhard Euler, and Pierre Maupertuis in the first half of the 18th century.

Lagrangian mechanics was a 1788 reformulation of classical mechanics by Italian French mathematician and astronomer Joseph-Louis Lagrange. The Lagrangian is widely used in physics. Lagrangian equations provide that any motion may be calculated by incorporating all the information about the dynamics of the system.

As has long been known, light travels optimally, as do all propagating energy waves. The mathematics behind this shows that such matchless motion necessitates omniscience. The universe knows itself.

This profundity is no casual conclusion. It is a proven statement about the fabrication of Nature. For light, or any energy wave, to behave as it does, all relevant information about actuality must be instantaneously incorporated. Every physics theory accepts this axiomatically.

Optimal propagation clearly indicates a unified, coherent intelligence from the quantum level on up, and strongly suggests teleology: that the game afoot which we call Nature has intention.