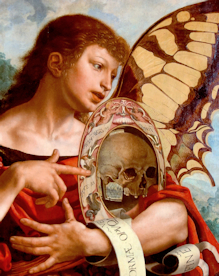 Ancient religious myths put disease as a risk to unbelievers and sinners. According to Hebrew mythology, in expelling Adam & Eve from their idyll in the Garden of Eden, God listed disease as one of the “wages of sin.”

In the 5th century BCE, Greek physician Hippocrates proposed that disease had a natural cause. The clash of this secular view against religious dogma echoed down through the ages.

Familiar epidemic diseases strike children and cull the sickly and elderly. Plague is distinct in targeting men and women in the prime of their lives. This aspect made plague seem supernatural, as well as magnifying societal disruption by leaving in its wake vast numbers of orphans, widows, and destitute families.

Furthermore, plagues showed no predilection for the poor like epidemics did. Plagues fell with a vengeance that reeked of judgment day. The plagues that episodically swept Europe in medieval times led to an outpouring of fervor with theodicy was a central theme: the vindication of God as good. A secondary theme was vanitas: the transience of life, the certainty of death.

As well as mass sickness, pandemic promotes an enervating fatalism. People realize how little they control – that fate deals the cards.

Epidemics evoke panic. Plagues usher terror. But both bathe societies in a dread of death which strains out comity and leaves a residue of shame in their aftermath.

Italian writer Giovanni Boccaccio (1313-1375) wrote about what happened in Florence during the plague that swept Europe in 1348: “citizen avoided citizen, kinfolk held aloof, and never met. Nay, what is more, fathers and mothers were found to abandon their own children – untended, unvisited – to their fate.”

English writer Daniel Defoe (1660-1731) reported on the Great Plague of London (1665-1666): “Every one’s private safety lay so near them they had no room to pity the distresses of others. The danger of immediate death took away all bonds of love, all concern for one another.”

When cholera struck Naples in 1884, the poor district was especially hard hit. A rumor swept the neighborhood that city officials were deliberately spreading the disease. when public health workers showed up, the locals revolted: pitching them down stairs and throwing furniture at them.

Naples officials thought bad fruit was the source of the disease. Peasants responded by gorging on fruit in public – their way of disparaging the elites who were so useless when disease struck.

The Spanish flu pandemic battered America in 1918. In Philadelphia, the head of public health pleaded for volunteers to help take care of sick children. Few did. His scornful commentary: “Women had delightful dreams of themselves in the roles of angels of mercy. Nothing seems to rouse them now. The death rate is so high, and they still hold back.”

American society steeped in shame over its 1918 pandemic response. Whereas 53,000 Americans were killed in the Great War, 675,000 died of flu in 1918. Yet that great killer left no cultural legacy. Instead, Americans drowned their collective guilt by indulging in the materialism that came to be known as the Roaring Twenties.

Every crisis in a society evokes a poignant statement of the ethics which underlie norms. As Covid-19 now presses upon humanity, the weaves of societal moral fabrics are again exposed.

Covid-19 originated in China. Local officials initially suppressed and ostracized those who first spotted the outbreak there: the kneejerk reflex of provincial China officialdom. As the epidemic became apparent, the central government took charge and turned the page: doing what could be done to slow the spread and openly sharing information with the world. China’s ruler Xi Jinping demonstrated exemplary leadership in showing concern and inspiring resolve.

Contrast that with US President Trump, who at first decried Covid-19 as a “hoax” and did nothing to prepare his country for the inevitable outbreak. Trump treated the growing epidemic as a potential political malady rather than a public health crisis.