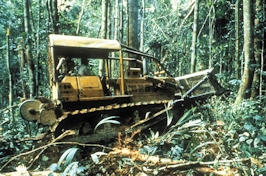 Extinction around the globe is accelerating. Local populations of different species are increasingly being wiped out. Humans have long facilitated the process with pollution and habitat loss. Now it’s not just high temperatures and drought, though those help the kill rate. The root problem is that the web of life is being torn apart.

The biosphere is an ecological gyre. All the ingredients go into supporting or degrading life’s prospects.

As one local species dies off, the species that depend upon it starve to death, or otherwise lose resources necessary for survival. This includes keystone species that create and sustain microhabitats, plants for herbivores, prey for predators, and species in mutualistic relationships, such as pollinators. The dynamic creates a cascade of death.

The real fruits of civilization are beginning to bloom on a worldwide scale. Yet there is little appreciation of how quickly the natural world that humans worked so hard to destroy is disintegrating.

There is no sense of urgency to do anything about climate change and its consequences. Humans are utterly unprepared for what they have unleashed.

The end is not near. It is only just beginning. The biggest extinction event since the Great Dying is just getting started.

Spokes of the Wheel Book 2: The Web of Life (pre-publication).

Spokes of the Wheel Book 3: The Elements of Evolution (pre-publication).

Spokes of the Wheel Book 6: The Fruits of Civilization (pre-publication).

Abigail E. Cahill et al, “How does climate change cause extinction?,” Proceedings of the Royal Society B: Biological Sciences (17 October 2012).