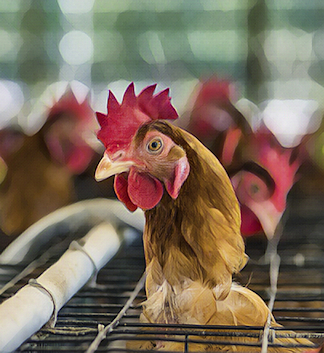 Farming has long had outsized political pull, owing to the disproportionate electoral power of rural areas over cities in ostensible democracies. Farm subsidies and tariffs on agricultural imports are common throughout the world; highlighting the hypocrisy of capitalists, who proclaim free trade as a cardinal virtue.

European leaders like to boast of their green credentials. This month the EU set ambitious goals to fight climate change and slow the mass extinction well underway. Yet the single most significant impediment to environmental quality improvement comes from the EU’s annual $65 billion tab subsidizing farmers; a sum which is nearly 40% of the EU budget.

In the spring of 2017, a group of government officials, lobbyists, academics, and environmentalists met to discuss green farming practices when a map appeared on an overhead screen. Those in the room instantly froze, followed swiftly by disgruntled murmurs from officials and objections from farm lobbyists.

The displayed map juxtaposed levels of pollution in northern Italy with payments of EU farm subsidies. The correlation was starkly obvious.

European officials for years have claimed that “greening” farming would help reduce emissions and preserve wildlife and the environment. Phil Hogan, who was until recently was the European agricultural commissioner, said “we now know it hasn’t worked.”

EU officials have known for decades the environmental harms of farming. In response they increased agricultural subsidies, bowing to lobbying pressure; all the while deceiving the public by advertising progress in fighting climate change.

An attempt by Dutch lawmakers in 29017 to reduce the pollution of livestock was met with tractors clogging the streets in protest. Subsidies invariably incur an entitlement mentality.

Worldwide, the public gives farmers $1 million dollars every minute. Only 1% of that $700 billion annual agricultural largesse benefits the environment. Most farm subsidies drive the climate crisis through environmental destruction.

“The hidden costs of global food and land use systems sum to $12 trillion, compared to a market value of the global food system of $10 trillion,” reports researchers for The Food and Land Use Coalition.

The current agricultural system generates ~30% of total greenhouse gas emissions and is the leading cause of habitat destruction. Industrial agriculture further perpetuates poverty and inequality. 2/3rds of the people living in extreme poverty are farm workers and their dependents. Agricultural workers often cannot afford to buy the food they grow. “The global food system is broken,” said British population ecologist Tim Benton.

A significant aspect of the current agricultural system is concentration of land ownership, which drives inequality. In Latin America, 2/3rds of the land is owned by 1.5% of landowners. Most folk are landless laborers: 1/3rd of the population has a hold on just 1% of the land. In Africa, 75% of the rural population own less than 4% of the land.

“World hunger is not created by lack of food but by poverty and landlessness, which deny people access to food. Industrial agriculture actually increases hunger by raising the cost of farming, by forcing tens of millions of farmers off the land, and by growing primarily high-profit export and luxury crops. Small farms produce more agricultural output per unit area than large farms,” observed American ecologist Andrew Kimbrell.

There is no need of subsidies to grow food. There is instead a need for leadership by government to ensure that food production is as environmentally sustainable as possible. Farming is yet another instance where capitalist ‘freedom’ has failed: inefficiently producing food at an excessive cost for humanity and the planet.

“Growing better: ten critical transitions to transform food and land us,” The Food and Land Use Coalition (September 2019).