How fast animals can fly depends on their size. Mostly. Tiny featherwing beetles can fly as fast as other insects 3 times their size. They do so by the evolution innovation of lightweight wings and a novel flap cycle.

Ptiliids are a family of tiny beetles, found in both temperate and tropical biomes. They are called featherwings because their hindwings are narrow and feathery. This configuration is called ptiloptery. 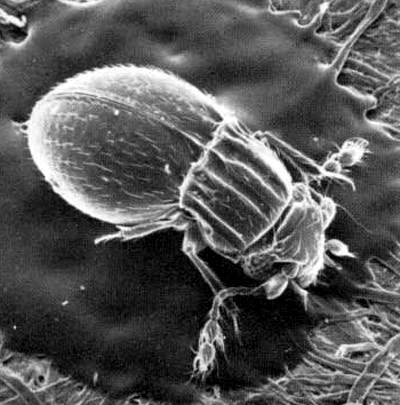 A featherwing habitat may be among leaf-litter or logs on the ground, on seashore seaweed, or other places where moist organic matter is abundant, such as among decaying fungi.

The membranous wings of most insects would be too heavy for ptiliids to fly, so they evolved a novel structure. Several unrelated orders of insects converged on ptiloptery as a flight solution. 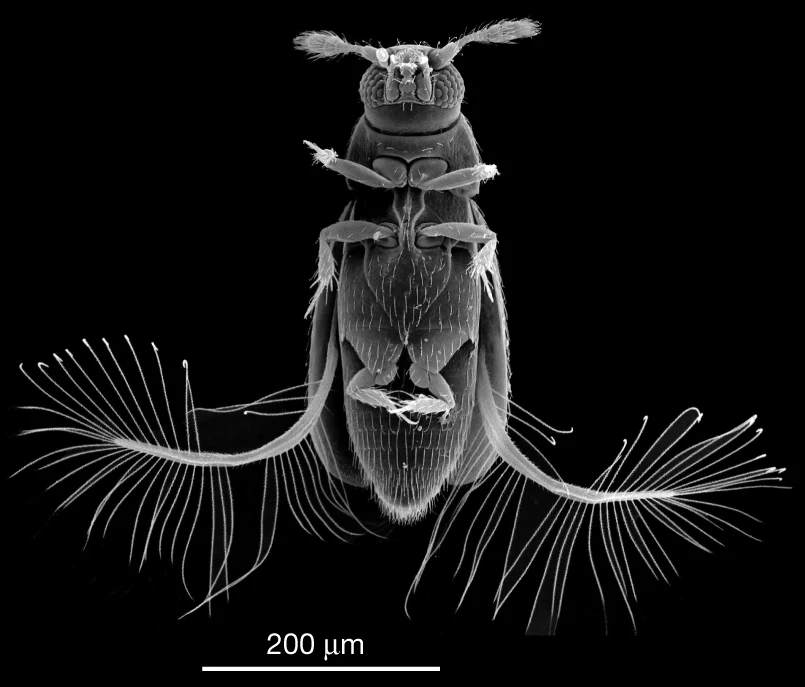 Ptiloptery works because air at the scale of a ptiliid is as dense as syrup. Ptiliids can be as tiny as 0.325 millimeters: the size of some unicellular organisms.

Ptiloptery is both form and function. Flapping bristled wings follow a pronounced figure-eight loop. There are 2 power strokes, during which most of the flight force is generated. These are followed by 2 recovery strokes. These stroke reversals consist of claps above and below the body. The forewings (elytra) act as inertial brakes that prevent excessive body oscillation. The flight of featherwings is similar to the kinematics of how miniature aquatic crustaceans swim.

Ptiloptery is no new trick. Ptiliids have been around for over 125 million years. There are 80 genera of featherwings and over 600 distinct species.

To get so small, ptiliids scarified some of their anatomy. Their digestive tract is simplified compared to most insects. Ptiliids don’t have a crop (for storing food prior to digestion), nor gizzard (for grinding food during digestion).

The limit to ptiliid smallness appears to be a functioning nervous system and reproductive organs, though many ptiliids dispensed with sex and practice parthenogenesis: growing embryos without the bother of fertilization.

Ptiliid eggs are extraordinarily large for such a small creature. An egg may be up to half the length of a female. Only 1 egg at a time is laid.

Ptiliids illustrate how exquisite the mind of a localized coherence can be in devising teleological (goal-oriented) solutions.