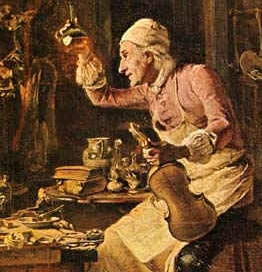 Italian luthier Antonio Stradivari (1644 – 1737) is generally considered the greatest artisan of stringed instruments. His violins – Stradivarius – are particularly legendary. Working wood to one’s will so that it produces a superb sound is an almost mystical craft. The choice of wood is crucial. Stradivari’s secret was having a friend in fungus.

Stradivari worked during a time when Europe had a cool climate: between 1645 and 1715. Trees during the longer winters and cooler summers would have adopted a conservative growth strategy: growing wood slowly and evenly, producing particularly dense, stiff wood.

Sound travels faster in hard wood than soft. Healthy hardwood is stiff and dense. Wood infected by fungus is degraded, its cells consumed or thinned.

Holey wood is worthless, but a fungus that thins wood’s cell walls without destroying them can be made into a musical instrument. Dead Moll’s Fingers (Xylaria longipes) is one such fungus. The wood retains its stiffness, but the fungus imparts its own signature.