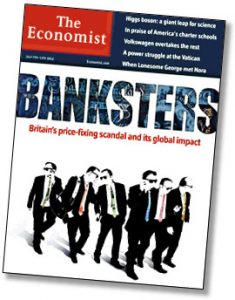 $800 trillion of financial contracts worldwide are based upon a fiddled fiction: LIBOR (the London Interbank Offered Rate). For decades, rates were set by colluding bankers under the auspices of the British Banker’s Association, essentially without supervision. All scams are revealed in time, and LIBOR proved no exception.

LIBOR aimed to measure banks’ cost of borrowing from other banks. Profit-taking collusion set the rate low and stable, when it should have realistically been higher and more volatile.

The participating LIBOR banks raked in untold hundreds of millions of dollars from this constant nickel-and-dime scheme that piled money into their vaults. Now that the system has been found corrupt, colluding regulators are scrambling for a band-aid, while private lawsuits soar for the fraud perpetuated.

The brouhaha will subside all too soon, with little accountability, and a meager amount of the ill-gotten gains retrieved. The banks involved are too important to systemic stability to be rightfully rattled.

Private settlements insisted upon by the courts, and soothing noises from the houses of political power, are the only solution to keeping the confidence game running; the game that is so essential to maintaining the fiction that financial systems worldwide function to the benefit of anyone beyond the plutocratic elite.