Few of us can afford the luxury of growing our own fruits and vegetables. We must rely upon commercial growers. But consumer desire for delicious is contrary to commercial interest in maximum yield, sustained shelf life, and visual appeal. To meet those goals, commercially-produced produce has become an exercise in tastelessness. 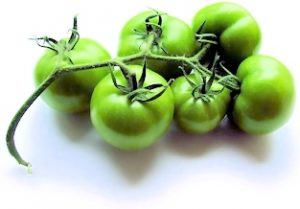 The tomato and potato, distant relatives, both originated in South America, and, over centuries, became worldwide commodities.

More than 13 million tonnes of tomatoes are harvested each year in the United States alone. Farmers pluck the fruit from the vine before it is ripe, preferentially selecting tomatoes that are uniformly light green.

This practice eases spotting tomatoes ready for harvesting, and ensures that the tomatoes glow an even red by the time they are sitting on a supermarket shelf. Wild varieties sport dark green shoulders, making it harder for the hired hands to know when to pick.

Commercial growers have bred plants that produce as much fruit as possible. The more tomatoes per plant, the less sugar invested in each one.

Tasty tomatoes are dark green because they are chock full of chlorophyll, to capture sunlight and turn it into sugars and other fragrant and healthy ingredients, including lycopene, an antioxidant with significant health benefits to human consumers. Commercial tomatoes are chlorophyll deficient.

Inferior tomatoes are picked before their time. Commercial picking of greenies rocks the ripening process, interrupting the conversion of starch to sugar. Fruit off the vine doesn’t ripen as well as it does when left to ripen.

Real tomatoes with vintage taste are still available, marketed under the label of “heirloom.” Heirlooms come in a variety of colors, each with different taste characteristics. Soft but not too mushy is best, especially for cooking purposes.

The best tomatoes, as with all produce, are organic. Organic tomatoes have higher levels of polyphenols and other beneficial compounds than conventional tomatoes. Polyphenols are natural antioxidants. 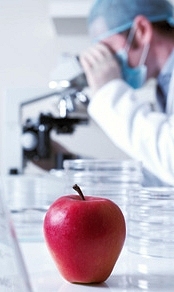 Commercial growers know how to ruin a sweet deal. The Red Delicious apple originated in an Iowa orchard in 1892. By the 1950s, it was the sweetest and crispest apple to be found.

Then, like the tomato, further commercial breeding practice favored production over taste. The red in Red Delicious remained, but the delicious sweetness was slowly replaced by a relatively tasteless woodiness.

Three-quarters of the Washington state apple harvest was Red Delicious in the 1980s. Consumers who once loved the apple abandoned it in droves, for other varieties with better taste.

In 2000, apple growers were bailed out by the federal government for their mistake, having lost three-quarters of a billion dollars in the previous three years. Though still the single largest variety produced, output has shrank to a one-third share in Washington state.

Using “gene therapy” licensed from an Australian firm, who worked on potatoes, Okanagan Specialty Fruit has produced an apple that doesn’t brown to show its spoilage, allowing a sorry apple to be sold longer.

The browning of fresh fruit and vegetables when hurt is spurred by enzymes: polyphenol oxidases (PPOs). A PPO substrate is dopamine, best known for its human brain system role in reward-driven learning. Oxidation of the PPOs forms quinones and the visible brown pigments known as melanins, which retard the growth of bacteria and fungi on damaged produce.

Genetically modified foods do not require approval from the U.S. Food and Drug Administration, which has been captured by corporate interests, along with the rest of the Federal government.

The British Columbia company is threatening to inflict its Arctic Apple technology on all of the most popular apple varieties. Look for it and pass it by. Be content in buying a bit of blemish, in knowing that a little bruise is an apple minding its business.

Ishi Nobu, Spokes of the Wheel, Book 2: The Web of Life.

Anna Vallverdú-Queralt et al, “Evaluation of a method to characterize the phenolic profile of organic and conventional tomatoes,” Journal of Agricultural and Food Chemistry, 60 (13): 3373–3380 (2 March 2012).