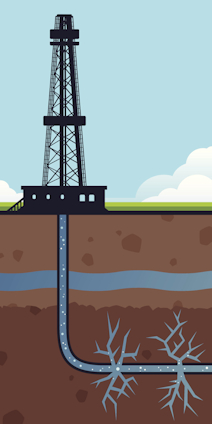 In 1956, American geologist Marion King Hubbert presciently predicted that American oil production would peak in 1970, based upon his idea that oil production through time resembled a bell curve. Almost 4 decades later, a technology discovered in the 1940s pummeled Hubbert’s peak oil theory.

That the flow rates of oil and gas wells can be improved via high-pressure injection of fluids through wellbores was discovered in the 1940s. By 1965, this technology was applied to shale deposits. Fracking (hydraulic fracturing) was an extension on fracturing techniques applied in the 1860s to stimulate shallow, hard-rock oil wells.

The practice of fracking shale spread to sites in Canada, Germany, the Netherlands, and Britain in the 1970s.

Widening the application scope of fracking practices, Texas operators started horizontal fracking in the late 1970s. Horizontal wells are often more effective than vertical ones in shale, as sedimentary layers are horizontal, and so potential fuel sources are best targeted with lateral injection.

With the massive slosh of money seeking investment havens during 1st decade of the 21st century, investors sunk fulsome funds into fracking, fueling a boom in the US. As the price mechanism never works in a timely manner, the fracking bubble burst in early 2015, as oil and gas prices plummeted from oversupply.

Not to be outdone in the rush to self-destruction, China surged pell-mell into a fracking boom in the 2010s.

Ordinary oil and gas wells are concentrated pollution sites unto themselves. Soil nearby is contaminated beyond redemption. And wells commonly leak. This contaminates soil in a wider area, and poisons local groundwater and nearby surface water bodies.

Fracking up-scales the environmental destruction of oil and gas extraction to an incredible level. Fracking is so bad that it makes coal look clean by comparison.

The water used for fracking is heavily polluted with brine and toxic chemicals which cannot be cleared out. In a single year, over 1 billion cubic meters of toxic wastewater is generated by fracking in the US. Much of this voluminous waste is not contained. Further, the poisonous water injected into shale gas wells suffuses in subsurface water for several kilometers to water which is extracted from wells for drinking.

Widespread spillage from fracking destroys the vitality of the soil and water that it touches. No area where fracking occurs has decent drinking water. The water supplies of Oklahoma and Texas are especially fouled from fracking.

The US areas fracked are those without an abundant freshwater supply. Fracking accelerates water shortages.

The US areas fracked are those without an abundant freshwater supply. Fracking accelerates water shortages.

Via intense injection pressure on sedimentary rock formations, fracking consistently produces earthquakes that extend far beyond the fracking field. Geologists have known since the 1960s that fracking causes earthquakes.

Fracking has made nearby residents sick and turned natural landscapes into brownfields. Over 150,000 hectares have been contaminated from the 90,000 fracking sites in the US. 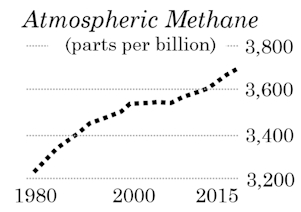 Those are just the terrestrial effects. Fossil fuel wells pollute the air and release voluminous potent greenhouse gases into the atmosphere. A surge of methane emissions came from the fracking boom.

For the first 20 years after its atmospheric release, methane (CH4) is 84 times better at warming the atmosphere than carbon dioxide (CO2). After 2 decades, methane releases its hydrogen and transforms to CO2.

Earthquakes caused by fracking are ignored by regulators. Fines are levied only for the most spectacular spillages and pollution events. The fines themselves are always an infinitesimal fraction of the economic and environmental damage done, and never enough to deter continuance.

“Hydraulic fracturing is being done safely under the strong environmental stewardship of state regulators and industry-best practices.” ~ Erik Milito of the American Petroleum Institute