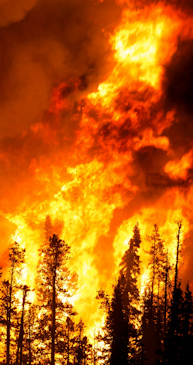 Wildfires, which are becoming more intense and frequent, are accelerating global warming in a fierce feedback loop.

In the stratosphere, ozone lazily lays, catching the Sun’s rays. ~98% of the medium-frequency ultraviolet light (200-315 nm wavelength) is absorbed in this ozone layer.

If not for the ozone layer, it would be much hotter on Earth’s surface – and life would be bathed in damaging radiation.

Industrial chemicals were produced which thinned the ozone layer. World governments banned most of these substances in the late 20th century. The ozone layer started to recover.

Forests are a vast terrestrial global coolant. Wildfires destroy that precious carbon sink. But that’s not all they do. Wildfires have become a burgeoning threat to the ozone layer.

The occurrence and severity of wildfires has been growing in recent decades. “Large wildfires can produce ascending atmospheric plumes of such great intensity that they inject smoke and other combustion products into the stratosphere,” writes biochemist Peter Bernath and his colleagues. This smoke injection is scorching the ozone layer.