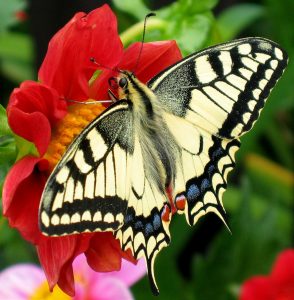 300 million years ago, some moths started sucking sap for their nutrition. Once flowers showed up, these drab insects turned into beautiful butterflies.

By ~240 million years ago (MYA), moths ceased to have chewing jaws for munching other insects, substituting sap-sucking mouthparts for chompers.

Once nectar became available, moths got in on the sweet treat, ~98 MYA. Moths switched their flying hours from night to day, when flowers were catering to their established clientele.

Fluttering about in broad daylight begat the opportunity to strut striking visuals as a way to attract mates; albeit, by dint of being more visible, the need to ward off potential predators. Visibility inspired butterflies to take precautions by way of making themselves toxic, and then advertise their indigestible status.

Moths evolved audition independently at least 9 times. Many did so before echolocating bats showed up 50 MYA.

Bats hunt moths via the echoes of emitted sonic pulses. Moths adapted to hear the pulses and evade their sender. That evolutionary cycle spiraled with bats adopting sonic frequencies which moths could not hear as well. Moths arose countermeasures: either jamming bat sonar by diddling its signal as to distance estimate or advertising itself as toxic (which shows that the moth biological system understands bat echolocation as a language). These mystical adaptations indicate a sophisticated awareness which cannot be explained by sheer physics or material means.

One group of moths escaped the evolutionary war against bats by becoming diurnal. Day time is the right time for nipping floral sweets. These moths added to the butterfly collection.

Geneticists can only trace the molecular artifacts of adaptive moves and countermoves. These artifacts testify to an intelligent force locally producing evolution as an ongoing biological circus, with the perceptible expressions being what we “traits.”

Spokes 3: The Elements of Evolution relates the history of life on Earth and explores the fascinating facets of evolution.