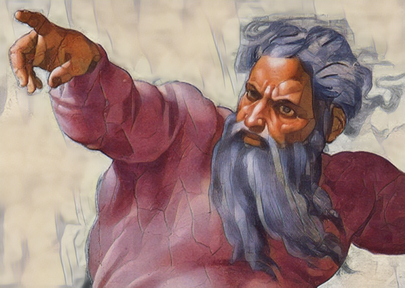 The idea of God as a Supreme Being was conceived in men’s minds by the 7th century BCE (before the common era).

It is a quintessential desire to understand so as to further enjoy. Control is integral aspect of enjoyment. Something we feel we cannot control which could affect our well-being incites fear, which is the essence of anguish. Capricious Nature has long fit that bill.

As exercises in comprehension, philosophies arise for enjoyment maximization and anguish aversion. We comfort ourselves with comprehension, regardless of its veracity. “Religion is the worship of higher powers from a sense of need,” said English religion scholar Allan Menzies.

As gregarious creatures, religions evolved as a means of cultural bonding and social indoctrination. Historically, as political regimes grew in power over a populace, they gravitated toward monotheism: teaching that there is a single God. Church and state entangled.

During the Axial Age (8th–3rd century BCE), moralizing ideologies gelled into the conception of an omniscient (all-seeing) and omnipotent (all-powerful) God, who created existence and monitors its progression, at times arbitrarily exercising his power. (With men ruling the world, paternalism cast God as the ultimate superman. In JudeoChristian mythology, the 1st woman (Eve) was crafted from the rib of the 1st man (Adam). Adam, a literal dirtbag, was made from “the dust of the Earth.”)

Moralizing monotheism was a heavenly vehicle constructed to bind together the sizable societies which had emerged from the conquests which created them. The belief system was rather incidental to its intended purpose of lashing together peoples and keeping order. As American journalist H.L. Mencken remarked, “People say we need religion when what they really mean is we need police.”

People are more compliant when they care about the impression that they make, or even if reminded that others may be aware of their actions. With a capacity for constant surveillance, an omnipresent, omniscient Supreme Being acts as a form of social control.

The God scheme has made a lasting impression. “The overwhelming majority of people living today believe that a mindful God controls their future,” note American psychologists Nicholas Epley & Adam Waytz.

The only time people ever entertain the possibility of changing a cherished belief is when their faith is shaken. This essay won’t shake any faiths, but let’s have a logical look at why God is missing in action. The focus is on the 2 key characteristics attributed to God: omniscience & omnipotence.

A key assumption in this analysis is that existence is ultimately mathematical:  that Nature (the exhibition of existence) derives from a dynamic system of symbols. This assumption is nonobvious, so some digression is merited.

Modern physicists universally concur that matter is composed of energy. Atomic bombs prove the point. Energy is nothing but an idea.

Existence is comprised of phenomena. By definition, phenomena are perceived events. Perception is individual.

To continue along this line for another paragraph before getting back on-topic, all we ever “know” is what we each individually experience; an obvious fact often overlooked for the fantastic mistaken opinion that there is an “objective” world. Instead, there is shared subjectivity: showtivity. (The derivation and mechanics of existence are beyond the scope of this essay. Refer to the “sources” section below for more on these subjects.)

What we each individually perceive are sensory impressions which the mind translates into symbolic constructs. Internally generated thoughts are also symbolic constructs (more obviously so because they are all in the mind). Hence, everything that can ever come to mind are symbols. Mathematics is the science of symbols.

In 1931, Austrian American logician Kurt Gödel argued that, for any formal mathematical system to be useful, it is impossible to use the system to prove every truism it contains. Gödel’s incompleteness theorems are indispellable.

In 2008, American mathematician David Wolpert logically proved that all knowledge of any possible universe is beyond the grasp of any intellect that might exist within it. So much for omniscience for an internal entity.

God cannot possibly be entirely within existence or s/he could not be omniscient. Therefore, if extant, God must be both external and internal to Nature; in set theory, a superset of existence existentially.

As an entity, then, God must be a being with all of existence in its mind. Irish philosopher and Anglican bishop George Berkeley proposed this very idea in 1713: “All things are created in the mind of God.”

Omniscience is therefore a workable construction. But then, time only occurs because of inattention (the Zeno effect), so God must not always be paying attention.

The other issue is omnipotence: God can do anything at any time. Therein lies a moral dilemma, which Greek philosopher Epicurus posited in the 3rd century BCE: “Is God willing to prevent evil, but not able? Then he is not omnipotent. Is he able, but not willing? Then he is malevolent. Is he both able and willing? Then whence cometh evil? Is he neither able nor willing? Then why call him God?”

Epicurus’ moral challenge cannot be answered in a way which renders God as decent. Christian dogma never managed to fruitfully address the issue, favoring instead a fable about Satan, who was an erstwhile angel who decided to have some naughty fun.

By any reckoning – as far as anyone can ever know – existence is eternal and self-sustaining. If God is existence, then God is effectively eviscerated.

The final nail in the coffin of God as a Supreme Being is that belief in God is a purchase of the deception that material objects make up the world – that existence is a matter of matter. Matterism has been scientifically disproven. All sensed entities are actually processes which the mind disguises as objects. Existence is nothing more than the play of concepts.

God can’t ‘exist’ because Nature is a ruse. If there is a Supreme Being, he is the Great Deceiver, with his followers worshiping lies.

An alternate explanation to how existence is fabricated makes more sense, and practically explains everything. The short version is this.

Nature is ultimately an immaterial, energetic unicity which generates an illusion of diversity as an entertainment device. There is a unified field of Ĉonsciousness which localizes into individualized consciousnesses for every seemingly physical entity which needs awareness, including proteins (organic macromolecules), cells, and organisms. Similarly (from a mechanistic standpoint), a universal, interactive “force” of coherence maintains existence – an ultimate ‘janitor’ which craftily localizes to keep order (the embodiment/birth-life-death cycle) and imaginatively (in problem-solving mode) creates movements which we call evolution.

As reality is an integral, indivisible monism, the ideas of Ĉonsciousness, coherence, and a diverse existence – that wondrous experience we call Nature – are merely mental constructs which provide the comforting illusion that we might know what is going on.

There is an extensive section on religion in The Echoes of the Mind.

A short course on reality and the architecture of existence – in Clarity: The Path Inside.

A scientific introduction into the fabrication of Nature is presented in Unraveling Reality: Beyond the Veil of Existence. On the Zeno effect.

The Spokes of the Wheel books focused on the natural world fulsomely explore energyism as the principle behind Nature, providing a comprehensive science education. The Hub of Being is especially devoted to proving energyism; it has an extensive analysis of what energy is.

Topical essays: energyism, the mechanics of existence, objectivity, concepts, the illusion of knowledge.